Traffic in the Muddleverse has been down lately, largely due to Google losing its love for my definitive treatise on over-easy eggs. (Seriously, though, there’s no better tract on that subject out there.) Another formerly-popular page has also sunk below the top-twenty fold: My episode titled ‘New York Sucks’. To be honest, I was surprised that my offering ever rose so high; surely there were plenty of other folk voicing the same sentiment.

Yet, for maybe two years, I was one of the top hits for the phrase ‘New York Sucks’. I learned during that time that idiot mouth-breathers occupied seats on both sides of the debate arena. There were some really cool responses as well, and I’m looking forward to my next venture into the hive. I think it’s going to be pretty awesome.

But now my little rant is off the radar, has been for some time, and I can breathe a sigh of relief.

Down near the bottom of the sidebar over there, you’ll see a few stats about this blog. There is one stat of which I’m really rather proud, even though it’s not really my accomplishment. The credit goes to you guys out there.

Muddled Ramblings and Half-Baked Ideas will soon have its 10,000th comment.

That’s a big deal. All those comments represent a huge amount of content and, well, intelligence that this little media empire would not have had otherwise. The comments are the second layer, the extra reward for those who choose to dig a little deeper.

How should we reward comment 10,000? Certainly it should not go unmarked. My first thought is to offer the same prize I did in a previous contest: the winner provides the opening sentence and I write a silly story based on that. It was a fun prize, especially since Bob (Bill Bob’s brother’s brother) came up with an excellent opening that resulted in Elephants of Doom.

Is there a better prize? Leave your ideas in the comments!

If you were to look back over my episodes for the last few weeks, you might notice a trend. Thursday seems to be a good day as far as productivity goes. Why is this?

Well, as you might guess by the title of this episode, there is a nascent tradition here at MR&HBI — Beer Blogging Thursday. Rather than go straight home from work, I take a detour for a couple of hours to a local sports bar and knock out a couple of episodes. I’m shooting for a new installment of serial fiction every other week, along with the usual blather.

At this very moment, I’m taking a little break from work and thinking about what I’ll be producing this evening. Two short book reviews, for sure (one a wrap-up of my thoughts on that damn epic I mentioned previously, the other a review of a novel by an undisputed master). I’ll take some time out after those to play with Allison a bit, but unless a miracle happens you won’t see the fruits of that labor until next week. Later tonight there might be some commentary on hockey, as well. Who knows?

I know there were several other things I had planned to tackle today, but at the moment I can’t think of them. I probably won’t publish all my output today, but instead spread it out over a few days.

It seems fitting that on Road Trip Day (7.000 on the Muddled Calendar — good golly how time flies) that this site should also find itself at a new home. The journey was not without some bumps and a lot of emails to the tech support team at GreenGeeks. Things seem to be running smoothly today, though, with a one hitch on the back side that should not affect you, the faithful readers.

One thing for sure: the site loads a hell of a lot faster now, and there are still things I can do to make it better yet. Average load time is about 10% of what it was before. That is unbelievably huge.

I’ll be posting a pretty darn geeky episode once I get the last issues ironed out, for people looking for answers to the same questions I had. In the meantime: 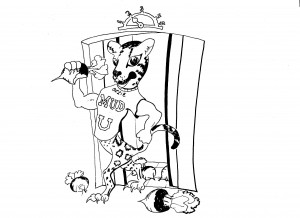 Yep, it’s that time of year again! No Pants Day here in the Czech Republic is a dreary day so far, chilly and threatening rain, but there’s nothing like a little pants-free action to add a ray of virtual sunshine.

I’d link to the song I just quoted (and tell you who wrote it), but that will have to wait.

Well, it’s too late for most people out there, but for those on the Left coast and parts West, here’s a reminder that when midnight rolls over and it’s Road Trip Day, if the very first words you say are “elevator ocelot rutabaga” your year will be filled with prosperity and good cheer.

Of course most of you have already passed the fateful line (and naturally those familiar with the Muddled Calendar have already invoked the magic incantation), but if you haven’t actually said anything yet today, it’s not too late! With me:

I’ll have more Road Trip Day stories tomorrow! Have a great year, everyone!

I’m getting the sweet-o-meter reinstalled. The old one broke and there was confusion about versions and so forth and in the end I decided to go with another plugin that seems to be more actively maintained. This one is fancier, but the creator really didn’t imagine all the different ways people might want to customize something like this. As a result I’ve been tinkering under the hood.

To get things right I need to see what it looks like when someone besides me has voted for an episode. Can someone out there click the “sweet” button at the top of this episode? Thanks!

It’s a special day on the muddled calendar, although the name is based on that old-fashioned calendar that many people insist on using even today. It’s February twoth, or as valued bloggcomm member and new blogger Jesse pointed out, 02/02, pronounced aught-two aught-to (rhymes with ought to ought to).

The day forms a nice partner with January twoth, a deadline to measure progress on the new year’s projects. (I really should have mentioned it back then.) My list of ought-to’s is a long one this year, starting with kick-starting the writing and reading more. Wouldn’t hurt to get a blog episode up now and then as well. I really need to get the muddled calendar displaying correctly as well, and get the sweet voting working again, and do something about Jer’s Software Hut…

What ought you to do today?

January twoth is a holiday in the Muddled Calendar, first suggested by Mr7k a few years back. He pointed out that January first is hardly the time to be getting a start on the new year, what with the aftermath of New Year’s Eve to contend with, and all the sporting events on television to watch. No, much better to have January twoth, New Year’s Day (observed), set aside for all the getting-off-on-the-right-foot activities.

This morning I thought it would be nice to post a short episode here and to spend a little time getting my own year started on a positive note. Then I noticed that January twoth was yesterday. Huh.

It be takin’ a majer hollerday fer me ta notice tha’ we no be havin’ any event countdown on yon sidebarrr. I be addressin’ that oversight afterrr tha’ weekend. Arr!

Whether you grind your own squirrels or just pick up a couple pounds at the local butcher shop, don’t forget to celebrate the day!

Due to an administrative error, some votes in the current poll were misdirected to adjacent candidates. There really should be a Florida joke here, but none of them turned out funny. I will use my own voting powers over the next few days to restore the votes that were lost when I fixed things. It’s not like there were that many. In the meantime, you, the faithful electorate are encouraged to continue in the best ballot-stuffing tradition.

As long as I’m doing one of these programming note thingies, I may as well mention the new section over there in the sidebar. It turns out these days that actual strangers and folks we don’t know happen by, and I figured a little orientation might help them get a feel for the place. Plus, a friend and fellow writer recently mentioned that I should brag more, after he read “Serpent”. He said a lot of nice things about that story. So, I’m bragging more, or at least giving people a shot at reading my stuff, as long as it’s out there.

And Hey golly! That’s what the poll is about! I could have sworn I wrote some funny things for Piker Press, but the five candidates in the poll were the best I could come up with. One of those ought to go in the favorites list, just to give perusers a change of pace. But which one? You be the judge!

I just got word from my service provider that something went wrong when processing my payment for this site. My current payment expires today, and if I don’t get it resolved in time there will be a blackout in the Media Empire. So if you don’t see this message, that’s why.

Ahoy, maties! I only be havin’ a moment ‘fore I weigh anchor and set sail to rendez-vous with Little John and the rest of his scurvy crew, but it would be ill indeed to let this day pass without a resounding “Arrr!”

Yes, you read that right. I have a new laptop. It is substantially faster than my old one, the screen is in much better condition, and the keys glow gently in the low light of the Little Café Near Home. Also the battery doesn’t last nearly as long and it set me back three month’s rent.

The mini is now in the shop for repairs. Hooray! Before you know it I’ll be up and running again, doubly mac’d and ready to rumble. I have quite a backlog of things to ramble about, as well as a bit of fiction to share with you. Who knows what might happen tonight!

Thanks, all of you, for your support and for sticking with the Muddleverse during my down time. Let us all send up a prayer to the gods of technology that I get as many miles out of this Powerbook as I did from the last.

Over the next few days I’ll keep this message at the top of the blog, but there will be lots of scrumptious episodes appearing below. Tune in often!