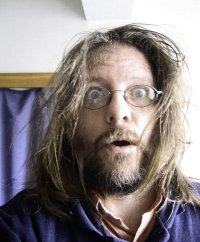 Once upon a time, a long time ago, Jerry Seeger was born in Pasadena, California, not far from The Institute of Technology, a mysterious facility where scientists—including his father—played with bosons and leptons for fun during their lunch breaks. What effects would the strange forces at work in the lab have on the child? Were there other, more sinister plans for him? We may never know. Before he could be taken by the lab, Jerry was spirited away from Southern California in a cardboard box and hidden high in the mountains of Northern New Mexico, where his father went to work at another, even more secretive laboratory. Something about neutrons.

Jerry led a normal childhood, fed on a steady diet of peanut butter, macaroni and cheese, back issues of Astounding Science Fiction, and very few vegetables. School was school, not much different from anywhere else. Jerry managed the singular accomplishment of making it all the way through without distinguishing himself in any way. Toward the end of his senior year, his favorite English teacher, Mrs. Shankland, asked him what he would be studying in college. “Physics,” he answered. Mrs. Shankland merely replied “Aww…” That one syllable stuck with Jerry, an implied endorsement for his potential in the literary arts. Funny how things work, sometimes.

Meanwhile, Jerry went off to pursue a career in Physics. Somewhere around Quantum Electrodynamics he lost momentum; it wasn’t a matter of intellect (he insists) or even interest, but somehow it wasn’t satisfying. In fact, Jerry was done with school for a while.

With a B.S. Degree in Physics, Jerry went to work in the fast food industry, and was later rescued by the computer programming biz, writing educational software to teach everything from macroeconomics to the concepts of up and down. It felt good to be one of the good guys, making the world a better place, and programming allowed him to use his creative skills as well. So it was all right.

Still, in the back of his head was that “Aww…” Secretly, Jerry harbored a growing desire to be a writer. He started writing stories that his friends enjoyed (or said they did), but nothing of consequence. Then, one fateful November, Jerry joined NaNoWriMo and pooped out an entire lousy novel in a month. (He assumes it’s lousy; he’s never read it.) When the month was over he kept on writing, until a year later he made the switch. Software became the hobby, writing the job. The rest is history.

He spent a few months driving the little roads of North America. Out on the road he took to blogging, and you can find all sorts of mildly interesting anecdotes in the archives. He then moved to Prague, where he lived for a few years. It’s nice there, and provided more blog fodder. Just about the time he started getting the hang of the language he moved to San Jose, California, to be with his girlfriend. She’s awesome.

Just because he started writing seriously didn’t stop Jerry from being a geek. It’s in the blood, baby. He created his own word processor, Jer’s Novel Writer, to overcome his rather scattered brain so he could keep on writing a whole dang novel without having to worry so much about remembering stuff, or looking stuff up. The software has since gotten some pretty great reviews from other equally scattered writers. You can check it out at Jer’s Software Hut. Sorry, kids, Mac only.

Jerry now spends his days tinkering with software and writing, all the while managing to avoid any appreciable income. Many of his stories have been published at Piker Press. His archives can be found here. Some of the stories are pretty good. Maybe not all of them, but there you go.