Before I left on the Homeless Tour, I put a bunch of stuff in a storage box. The assumption was that eventually I would have a home again, and I’d appreciate having stuff to get it started.

Ten years later, My Sweetie and I have unloaded that box into the photo studio, where now we must figure out what to do with an apartment starter when there’s no start needed.

Apparently, I anticipated needing lots of toys. Here’s a quick list of some of the items:

I expect there’s more. The badminton set is pretty cheesy, a backyard-at-the-family-picnic sort of thing, while the volleyball net has been through a series of upgrades that rendered it pretty nice for a portable unit. I wonder if the sledge hammer is still in the bag.

When I got home from work today, I was beat. Plum tuckered out. I came in, hugged my sweetie, and plopped in front of the computer. Then she told me about the package in the living room. Suddenly I had a new burst of energy, and I spent the evening photographing stuff around the apartment. Anything that would hold still, really.

You see, there’s a camera lens I’ve been looking at for a long time. Sometimes I’ll even look in on eBay to see if one is going for less than usual. Last week, I found one at a good starting price. No one had bid. It was a few hours before the auction ended, but for stuff like that all the action happens in the closing seconds. Still, I set an alarm for a couple of minutes before the auction ended. If I wasn’t busy doing something else, I’d look back in and watch the action.

No one had bid. Time was winding down and no one at all had bid on the lens. It was more than I could afford, more than I had any business spending. The seconds ticked down in red digits. An appeal to my sweetie followed, hoping for reason but dreading reason far more. My finger was on the button, ready to pounce.

A little camera geekery: photography is filled with numbers, and this lens has one eye-popper: f/1.2. The smaller the number, the ‘faster’ the lens – the more light it gathers in a given period of time. 1.2 is a very small number, meaning this lens can open way up and take in a lot of light. That in turn means it works very well in low-light situations. That can be really handy when it’s not practical to lug lights to where the action is. There’s another side effect of this gaping aperture, and that is that the depth of focus can be very, very shallow.

Depth of Focus is a little tough to explain because we don’t experience it with our eyes – they are constantly refocusing on whatever we’re interested in at the moment. But the concept is really simple. When things are too close to the lens, they go out of focus. Too far, out of focus. Then there’s a middle range where the picture is sharp. With some lenses that middle range is so huge that pretty much everything is in focus, unless it’s really close. That’s a good quality on an instamatic with fixed focus. The lens trades off in other ways to get that effect, but for taking pictures at the beach it works pretty well.

My new lens is at the other end of the spectrum. Consider these two pictures I took while sitting a few feet back from my desk (you can click to see them larger):

my mug, focused on the front of the rim

my mug, focused on the back of the rim

Even from a few feet away, the depth of focus is maybe three inches. Those candles are about four inches behind the mug.

Why would anyone want a lens with such a restriction? Holy carp, it can be pretty tricky to get the focus just right when there’s so little room for error. You could seriously get one of your subject’s eyes in perfect focus, but not the other.

But look how the mug is not lost in the clutter of my desk. Those are pictures of my mug, and nothing else gets in the way. I have pictures of rock stacks on rocky backgrounds, and headstones in a cluttered graveyard that could really have benefitted from this technique. When things are similar color or texture as the background, focus can make all the difference.

My sweetie was laughing at me as I drifted around our apartment, which is currently in a state upheaval for our move, taking pictures of this and that. I wanted something sparkly. I found it in the living room, where this teddy bear also lurked. 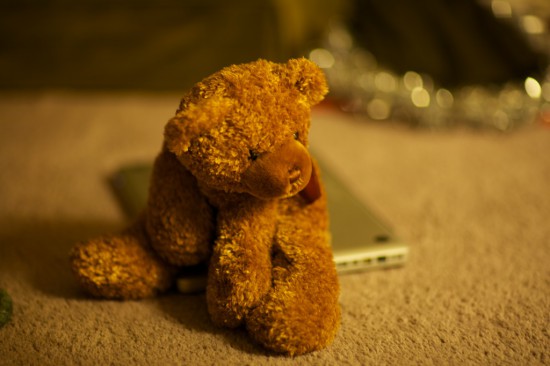 My first portrait subject with my new 85mm lens.

It’s not just that things are out of focus, it’s that they’re beautifully out of focus. Note how deliciously soft the candles are behind my mug. In this shot, I had to choose what point on the bear’s face I wanted to focus on – note that the closer ear is in the soft-focus zone.

Why did I want sparklies? It’s a good way to show the bokeh, or the characteristic of the way the lens blurs the image. My new lens is carefully built to provide smooth, circular bokeh. This is a function of the way the aperture control works – the dots are actually projections of the iris mechanism inside the lens. Often they are hexagonal or another geometric, unnatural shape. It’s most obvious for the sparkles, but it affects the rest of the shot more subtly as well.

I’m sure that somewhere in my great heap o’ pictures I have some that demonstrate other bokeh, but I’m not sure where. I could go digging, but tonight is about the new lens.