Every now and then, when it has been an emotionally draining day, we invite the dogs to hop up into the big bed with us, so the whole pack can be together.

While Gilfoyle enjoys being up there, Lady Byng lives to be snuggled with the pack. Last night was a pack night. Tonight, every time I look toward the bedroom, she tears off in maximum excitement, sure that tonight her dream of being on the Big Bed will be realized again. She has cracked the code, knows what to do, and there will be Big Bed nights forevermore.

Except nope, there is nothing she can do to change the outcome tonight. Some outcomes you don’t control, as much as you would like to think you do.

About two years ago, we welcomed into our house a little asshole we named Gilfoyle. He is at least in part a Lancashire Heeler, a very small dog designed to move large animals. You want to succeed at that job, you better be an asshole.

Right now he is under my desk, sleeping on my foot, snoring a little bit. Wherever I sit down to work, he will always be close by. He loves Mommy more, but I stay still.

In the evenings, there is a routine. After a few minutes of snacks and training the dogs and the humans take their places on the couch. Gilly (after sniffing the outside air, drinking water, and rubbing his face on the floor) jumps up on the couch (with a tiny, tiny bit of assistance) and takes his place against my left thigh.

Sometimes, if the Official Sweetie and I are still snacking, some tiny treats will also reach the canine elements of our pack. Last night we were eating chips, and now and then a tiny piece of chip would find its way to the pups. They do likes them some chips.

But then I offered Gilfoyle a chip and he went totally fuckin’ nuts. He bit my finger and then went after any part of my body he could reach, barking and flashing teeth and… I dunno, fighting for his life?

I should have been more ready. I had been sipping Tequila, and I’ve seen plenty of times before that when I’m drinking liquor Gilly is much more volatile.

It breaks my heart. I don’t know Gilfoyle’s history, but I can make a few guesses. When Dad’s been drinking, prepare to fight for your life. I will never erase that impulse. I can never love this dog so hard that those scars go away. But Gilfoyle, my friend, my foot warmer, I will never hurt you. I promise.

I’ll admit it, yesterday I snuck over to Facebook to see what people have been saying about my more recent episodes (I probably log in to Facebook as often as once a month these days). In response to my recent episode about getting creative with sports, Candace Reedy said, “I always thought golf and tennis would be greatly improved by retrieving dogs…”

I agree wholeheartedly. And dogs and tennis balls? It’s as natural as beer on Friday. I once wrote somewhere in the million-plus words of this blog, that if dogs could raise a statue, it would be to honor the person who invented the tennis ball.

So — dogs and tennis. Obviously a good idea. But how, exactly, would it work? I’m here to help make that real. You don’t have to thank me, it’s what I do.

Overall, I think dogs would add two things to the game: chaos and slobber.

Let’s think about slobber. You’re going to have wet-ball players and dry-ball players. When you serve a ball that is sodden with dog drool, it will feel like you’re hitting a lead weight. If you serve with the usual overhead motion, you will be launching a slug and while it might not get over the net quickly, when it touches the surface on the other side, it will drop flatter than a biological slug. The ultimate dream of topspin players to keep the ball low to the surface on the bounce; with a drool-ball there will hardly be a bounce at all.

But when you toss that saturated ball over your head, dog spittle spinning off, droplets shining in the sun, your opponent will know what is coming, and rush the net. So what do you do instead? The lob-serve. Hit it deep, keep it squishy, and your opponent will be forced to hit it on the volley rather than let it “bounce” – a relatively tough shot.

But here’s were things could get tedious. Your opponent is just as restricted as you are concerting shot options. She will be sending a lob right back. Not exactly the recipe for excitement.

Except, of course, there are dogs on the court! And the right dog for this game will be expert at shagging lobs. But then what happens? Simple: If the dog catches the ball on the volley, it’s a point for the dog’s team. If the dog catches it on the first bounce, no points for either side, a do-over. The dog can enjoy the ball for a limited time, juicing it up, but when her teammate says “drop”, the ball is returned to play.

Imagine you’re Roger Federer, able to serve a thousand miles an hour, give or take. You’re a dry-ball player. Your dog is an Australian Cattle Dog, nimble as all get-out and filled with energy, but is well-trained to give the ball back before it is too sodden. Your dog’s name is something like “Ace.”

Today you’re facing an up-and-coming dog-tennis player named Casey, a scrambler in the Michael Chang mold, and his canine teammate Luna, a youngster of uncertain parentage with strong legs and an almost limitless supply of drool. Casey is good at deflecting hard serves so that Luna can have a shot at them, and Casey’s scrambling style will eat you alive once things get sloppy. A classic wet/dry showdown!

Stuff like that is what sport is all about.

Yesterday evening we arrived home from the nearby animal shelter with a new friend. 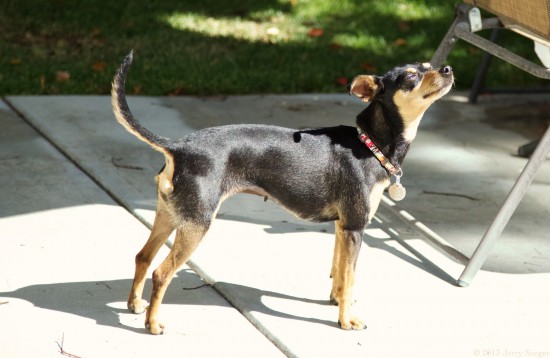 She is named for the hockey trophy that is awarded each year to the “player adjudged to have exhibited the best type of sportsmanship and gentlemanly conduct combined with a high standard of playing ability.” Yes, it’s hockey’s Miss Congeniality award. Fitting to her name, she is a very well-behaved little dog, who doesn’t need to be told more than twice where she is not allowed to go (though the subtleties of sofa-with-blanket vs. sofa-without-blanket are still confusing to her after 24 hours).

She is also very quiet. Last night, as we put her into her bed in the laundry room she cried for a while, with some really odd-sounding vocalizations, but nary a bark. Once she figured out that we were still nearby she settled down to sleep.

So, welcome to the pack, Lady Byng.

It was a tough day, overall. I’ll go into details later, maybe. But here’s a happy story, even if it’s a few years old. It’s the story of Popsicle, a puppy found wrapped in a plastic bag in a freezer.

Popsicle was saved, and went on to be awesome. So, yay, Popsicle!

Sad news for fans of the Official Muddled Dog: We’ve been busted. You see, the ol’ gal is substantially larger than the nominal limit for our neighborhood. Even at her ideal weight she would be quite a bit too big.

The rule is very inconsistently enforced, however; so as long as no one complains, management is willing to not see the big dog. Well, we’re getting new neighbors and before they moved in they complained. Management has notified us that our quiet, gentle, well-behaved dog must go.

Looking for a home, once again.

To my new neighbors I say, “The next time your &*$#^*@ fence is on fire, there won’t be a dog around to alert people to the trouble.” (True fact: OMD raised the alarm a few days ago when a fence was burning. Just like in Reader’s Digest.) But, I remind myself, we were the ones breaking a rule, we knew we were breaking it, and the neighbors have every right to be jerks and rat on our dog before talking to us. They don’t know us, they don’t know how we would react. The era of neighborliness is sadly over. How long ago was it that when something bothered a neighbor they just went and knocked on the door before calling in higher authority?

Now there’s someone who’s bed is maybe thirty feet from mine, whom I’ve never met, that has pissed me off. Part of me wants to get a new dog that fits the regulations and barks nonstop.

But that’s not constructive. What is constructive is helping to find this fine animal her permanent home. Apparently our role in her life is an interim stop between old and new homes, so we can make sure she lands in a good place.

Please, especially if you’re in the Bay Area, put the word out that there’s eighty pounds of unconditional love just looking for someone who needs her.

It’s going to be really tough to say goodbye.

In the Official Muddled Dog’s mind, there are three things more awesome than anything else. Food, belly rubs, and tennis balls. I don’t know who invented the modern tennis ball, but if dogs had a museum his statue would be out front. As any tennis player will tell you, however, it’s only a matter of time before a tennis ball is nothing more than a tattered pile of rubber fragments and colored fuzz. It pays, therefore, to buy in bulk.

My sweetie came home from Tennis Balls R Us yesterday with a 12-pack of the fuzzy toys and OMD did not need any prompting to claim the entire bag for herself. Hilarity (and pictures) ensued.

The Round Mound of Hound in intensive training.

My sister asked if Official Muddled Dog had any positions besides “prone”. I’m happy to answer yes, as long as there’s a tennis ball around. The third shot of the set demonstrates that maybe shooting at f/1.2 isn’t always the right choice — could have used a bit more depth of focus there.