It was a gray Saturday morning in Los Angeles, with the occasional misty rain. My costar and I were running a bit late for our breakfast meet-up with the director, a delay caused largely by my inability to get out of the hotel room with everything I needed. We were both groggy, having not slept well despite a comfortable bed at the Hilton (a hotel whose motto should be “we charge extra for that”). Chalk it up to anticipation for the events of the day. 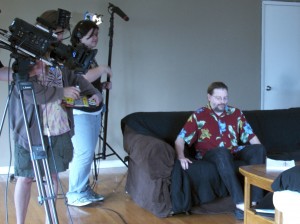 Breakfast was nonetheless pleasant. Eggs over-easy (flipped too soon) and decent pancakes at a place called Twain’s on Ventura Boulevard. fuego, Harlean, and I managed to communicate while blessed caffeine worked its magic. fuego told us stories from the previous days of shooting. I’m really looking forward to seeing the other episodes — especially the one I wrote. Eventually fuego had to go pick up our Director of Photography and a bunch of gear. He left us with a map to the day’s location and an hour to kill. 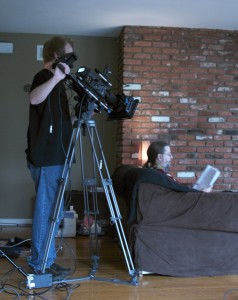 Getting a shot of the prop script over my shoulder

The location was a beautiful house overlooking Universal City. (The sound guy later pointed out the set for ‘Desperate Housewives’ below us.) The crew set to work and they all seemed competent as far as I could tell. While this was not nearly the size of production as “Moonlight Sonata” there was still plenty of stuff to set up. Once again we were shooting on a Red, although the lens kit and lighting package were more modest. The sound guy and his assistant were on the ball. While that was going on my costar/make-up tech went to work on my face. Soon we were ready to shoot. 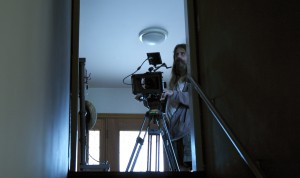 fuego frames the shot of the producer coming up the stairs

The first few shots had no dialog, which was good. It gave me a chance to get comfortable and get in the flow of things. At the same time, I haven’t the slightest idea how my facial expressions work onscreen. Too much? Not enough? I guess I’ll know soon. In the end there were quite a few shots to put the action together, getting me from reading a screenplay up the stairs with an extension cord and into the bathroom where my wife was bathing.

There was a rather long break while the crew put gels over the windows in the bathroom to adjust the light color. Meanwhile Harlean took care of her own makeup and we went over our newly-redrafted lines. (The original lines were overtaken by events, particularly the time of day we could shoot.) Finally everything was ready, the special effects guy and his helper showed up and went to work, and we broke for lunch. At that point I was ready to just get going with the dialog, but the ribs were delicious. 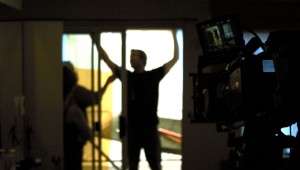 The afternoon went smoothly, as far as I could tell. Nobody complained about my acting to my face; and Harlean did a great job — such a good job we added a line to let her exercise her pissed-off/sarcastic vocal tone (the one that will make her all the rage in Hollywood). A blow-dryer took a bath, sparks flew, breakers popped, and I said the line “This is awkward” about a dozen different ways over the course of the shooting.

One thing I can say as an actor, I’m not the sort of guy who complains about doing another take. There’s always something I want to fix about the last performance. In fact, as I sit here now, I think I’d like one more go at the speech that leads up to the blow-dryer toss. I think I could have been a lot more expressive, with more expansive gestures. Generally more mood-swingy, edging toward euphoria. 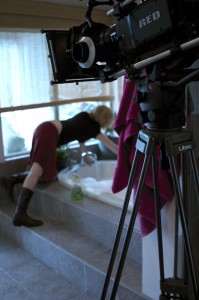 The day ended with director, DP, and the two actors enjoying a beer in a Studio City living room, watching the sun set over Universal City. It felt good, having it behind me, having a general feeling that I didn’t mess things up too badly. Over dinner that night we made plans to get back together when a rough edit is done. I wonder what I’ll see.

Note: You can see a bunch more pictures at my gallery.