While living in Prague I probably drank more tap water than anyone else I knew, but I drank plenty of bottled water as well. Since I was a) environmentally aware and b) lazy, I ended up with a large collection of bottles waiting to go to the recycling bin up the road. After a while I began to observe a pattern, and as I packed up the apartment to move back to the states I took a brief timeout to document the phenomenon. Please observe exhibit A: 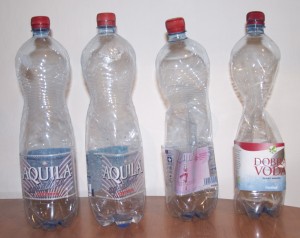 The bottle on the left is the youngest, the oldest is on the right. The burning question for today is, “why are the bottles shrinking over time?” All the bottles were stored with lids on, some with dribbles of water in them. Sometimes the water had been carbonated, other times not. Bottles do not puff back up when the apartment is particularly warm, nor can I find any other thermal explanation that would not even out over time. Age (on the scale of months) is definitively a factor.

So what’s going on? Is there a chemical reaction with the plastic that is reducing the number of gas molecules inside? Is there a sort of one-way membrane effect going on that lets air molecules out but not back in? Most likely the pressure is lower in the bottles than outside, due to the plastic wanting to revert to its original shape — unless there’s something about plastic that makes it want to shrivel up like that.

Any chemists out there want to hazard a guess? Physicists? Mechanical engineeers? UFO conspiracy specialists? Science Fiction writers? I’ll listen to any theory you care to offer.

13 thoughts on “A Science Question”