Some people ruin their drinks with ice,
and then they ask me for advice.
They say, “I’ve never told this to anyone else before.”
— Lou Reed, The Power of Positive Drinking

I was thinking of that line even before Brian mentioned not putting ice in his beloved Lagavulin. It’s a sad day that that even needs to be said. Ice. pff.

Holy Crap! Sweet Jane just came on the TV radio station. It’s a cover, but it still counts as a plate of shrimp. It’s a good cover. Oh, man I feel good right now. I was feeling pretty good before, but then with head-slap thunder the 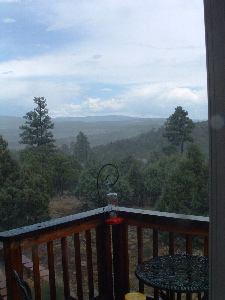 rain started coming down just as the second beer was finding my nervous system. Late in the season for a monsoon, especially considering the dry August, but just what the doctor ordered for heart and land. And the smell, the smell. Ozone and soft mud. More thunder, punctuating Buffalo Springfield.

The temperature has dropped a few degrees: It’s whiskey time now. On each side of me a dog lies twitching, running with the wolves they’ve never learned they’re not.

I’m trying not to resent the arrival of the family later this afternoon. It’s their house, after all. They paid for it and everything. The only thing is, I have put the Jerry vibe into this place the last few days, and it’s just now building up to critical mass. I feel the vibe most intensely right now. It is a calm feeling despite the loud music. (Next time I get up I’m going to turn down the bass just a wee bit, bringing the vibe incrementally closer to perfection.) My quiet madness reaches out across the Chama Valley and reflects back to me off the far Brazos Peaks, rolling with the distant thunder, dancing with lightning, and I know the storm is here for me. I have called it from the place where storms sleep, roused it for one last grumbly dance across the land.

The thirsty land feels my energy, and amplifies it. The rich mud hosts tiny creatures fleeting across brief puddles, in a madcap accelerated cycle of life. Water! Grow! Sex! Die! In this frantic call to life I am unnoticed, but something rises from the muck that I smell and understand. Some bugs are getting laid tonight.

Ooo! Look! A can of mixed nuts, sitting right here next to me! Truly the Universe is resonating with me today, responding to my needs even before I know them myself.

My vibe, apparently, is a fragile one. Bringing other personalities too close to it pains it. In a bar, I can create a vibesphere, and close myself in my own aura for a few precious hours, but in a house with other people around the bubble shatters into tiny red fragments, needle-sharp little brain jammers. Better not to even try to bubbleize in the first place.

But for now I sit, pupflanked, Scotch Guarded, open, resonating. Feeling the power.

16 thoughts on “The Power of Positive Drinking”