I went back to the High Country Saloon tonight. (The interior promotion all says High Country Lounge, but what does Anheuser Busch know? The sign above the door says “Saloon”, and that’s good enough for me. The other door says “restaurant”. You know which door I went for. I wrote for a time, with Nikki cheering me on. I’ve had people ask me what I’m doing, but rarely does someone ask, “Are you writing a novel?” For those people I am always embarassed to answer yes, because people who ask tha question are clearly more literature-oriented.

Not so Nikki. She told me that for school papers she had a hard time getting past two pages. I tried, unsuccessfully, to convince her that the ability to put a good idea into the smallest space was a great virtue. I know I could learn to be more compact. Still, it was nice the way she remembered me this time. Sure, “Laptop Guy” is easy, but “Get Novel down to less than 500 pages guy” requires a little more customer interaction. Plus Nikki is cute. 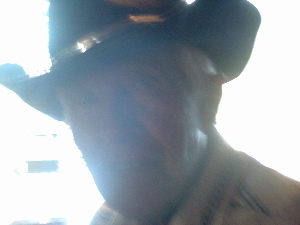 Nikki is not who I’m writing about tonight, though. After I did my work tonight I moved from my table to a barstool, where I sat next to Mr. Lujan, disabled veteran who fought in the pacific, who went on to be a magistrate judge, who went without benefits for thirty years because of the bullshit. (His first name started with an S. I was told it more than once, but I’m not so good with names.) He was a rancher, a small businessman, until taxes put him out of business. Two years ago. He’s not a big fan of Dubya, even though he’s the exact profile of citizen that our fearless leader is supposed to be loved by.

Lujan had stories. I only heard a fraction of them. He sat next to me, and with his soft voice he held me. He spoke of watching him return through his binoculars at Leyte Gulf. He told me about Okinawa. He told me about about the clarity of his conflict, and how he felt for the Marines overseas now, with no clearly defined enemy and no clearly defined goal. His war was easy, he said, compared with what our soldiers face now. He told me that after he showed me the scars he had picked up from shrapnel. “We just have to bring them home,” Lujan said.

Then he told me how he had landed in jail for DWI, even while he was a judge. Some of the boys he had previously sentenced sprung him from his cell after he took some time to learn their stories. He wanted to know how they had ended up there, and when the rest of the law enforcement community figured out who they had collared and came to let him go, he refused to leave. He served the sentence he would have given himself.

Lujan is retired now; he sold the last of his cattle two years ago. There really is no room for the small farmer anymore. I’m not going to put a value judgement on that. Big farms are more profitable. There aren’t many big farms up here, though, and the famous tax breaks aren’t doing anyone up here squat. The last large animal vet is about to move a hundred miles south.

Retired I suppose is the wrong word. At eighty-something, he still works cutting hay and who knows what else. He has his horses and his passion. He has his health, and he has his friends at the High Country Saloon.