Recently I did a shoot with Harlean (who is a fiction), and ended up cranking the ISO setting on my camera up to 1600 just to get shutter speeds in a reasonable range. That left her with some pretty tough cleanup in post production, and meant the pictures were not what they could have been. “That does it!” said I, “We’re gettin’ us some lights!”

After some research I chose Alien Bees for my new strobes. In (sometimes heated) discussions online the only concrete criticism light snobs could downgrade the Bees for was not costing enough. The day I’m good enough to say, “you know, I could really use better strobes,” will be a good day indeed. (Although, I once thought I would never need more camera than the one I have now, and guess what? I think I’ve actually reached the stage where I would get better pictures with a better camera. No one is more surprised by that than I am.) 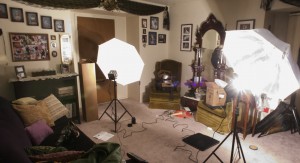 Anyway, the lights arrived today and I made a shambles of the living room unpacking boxes and setting things up. Pretty slick, huh? I’ll still be looking at accessories — first step, CTO gels to mix better with the ambient light, then maybe a softbox or two. We’ll see. There’s more than enough to keep me busy as it is.

Naturally, I wanted to get to work taking pictures right away, but it would not be fair to ask a human to sit through hundreds of experimental shots while I fiddle around with lights in the “lets see what this will do” mode. I asked my sweetie if I could borrow some shoes to shoot. She has a few pair kicking around. I figured shoes were interesting, and had an architectural quality. I wanted to see if I could capture the curves and forms with well-placed light. 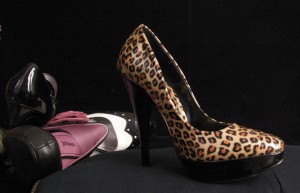 I wasn’t very specific about what sort of shoes, but she came through with four shoes that each presented different lighting challenges. One high-contrast, another very shiny, and so forth.

I took a lot of pictures of shoes, at different angles and with different backgrounds. In some cases, the background was lit better than the shoe, in others, some details of the shoe were lost. In many you can see my reflection in the leather, not just the reflection of the lights (which is problem enough).

Note that I didn’t spend a lot of time choosing the photos to go in this episode — they’re decent examples but not necessarily the “best” — whatever that means. Each of these has something I like, however.

It became apparent pretty quickly that having lots of light is useless if you can’t control it. I knew this intellectually already, but there’s nothing like getting down there in the trenches to bring the lesson home. 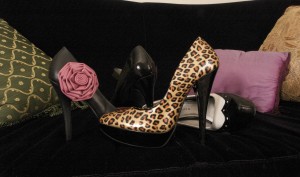 Another still life with shoes.

I also got some fun serendipity along the way, like light reflecting off the lining of one shoe creating a great highlight in the heel of another.

I got a bit worried after a while, that I couldn’t turn the lights down enough to let me open the aperture to limit my depth of field. Now, there was a problem I didn’t anticipate. It turns out, as I was reviewing the photos to post here, I realized that my camera was still set to ISO 1600 from the other day. Tomorrow when set the speed down to a safe and sane 100, I’ll get much richer pictures and a lot more options for exposure. So, while these pictures have their flaws, I’m really excited about how my pictures will look after a few thousand more practice shots. Woo hoo!