Since I’ve been playing with my new strobes, I’ve taken a lot of pictures of shoes. Well, let it not be said that Jerry Seeger is a one-dimensional, shoe-only kind of photographer. I’ve now also photographed an actual human being (albeit a fictitious one), and, most recently, I’ve expanded my inanimate object repertoire to include beer bottles.

Lacking the energy to write an episode for you all, I’ve decided to share a couple of experiments I did splashing colored light off a white backdrop, and using the shutter speed to control how much color got mixed in. One of the biggest challenges was keeping the light from the strobes from hitting the backdrop. 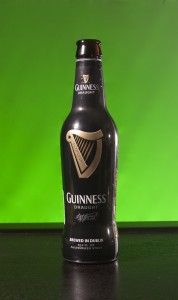 Beer bottle on green background. On this shot you could really see the wrinkles in the white backdrop, so I smoothed them out in iPhoto. Some odd things happened in the process, strange smudges that appear and disappear again, making me wonder once more what the %^*$ iPhoto is really doing. But I keep using iPhoto for quick-and-dirty stuff (which is just about everything). Why? Because it’s easy and has better workflow than any other program. Better for me, anyway. 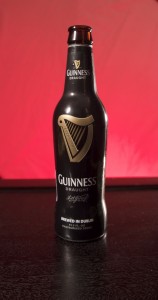 Beer bottle on red background. This one I shot with my fish-eye lens, which let me get right up in the bottle’s face, putting the backdrop out of focus. In both cases I was keeping the aperture about as far open as it would go. No need for touching up. Getting a rich red color and still lighting the bottle well proved to be tough – extra light on the bottle washed out the background. In the end I had stray equipment covers, a laptop case, and a sofa pillow all blocking bits of offensive light. The pillow was blocking lens flare from the strobe behind the bottle on the right, the laptop cover blocked the right strobe from spilling onto the background, while another black nylon case blocked (most of) the spill from the front-left light onto the backdrop. I need a snoot!

3 thoughts on “Pictures of Something Besides Shoes”