The call of the road was less urgent this morning, and I got a good start on the day by going in to Central Weed for breakfast. I missed out by jumping on the first hotel I saw last night. The one I stayed in was nice enough, but in Central Weed there were a couple that advertised much better rates. More important, Central Weed even has a little downtown area with a couple of promising-looking bars. Alas, I will never have a chance to learn the charms that lie behind the door of Papa’s. It didn’t really look like my kind of breakfast place. I was scouting around for a good place for breakfast when someone in a moose costume directed me to a place called the Hungry Moose (or something like that). It looked OK so I went for it. If some poor bastard or bastardette is going to stand around in a moose costume they may as well get something for it. While I secured my belongings several passing cars honked at the moose. Not an annoying honk, just the social beep-beep hello-neighbor sort of honk. I imagine in a town that size everyone knows who’s in there.

After eating more than I should have at the all-you-can-eat buffet, I wedged myself into the Miata and pointed its nose up Highway 97. With Shasta on my right, shining white against an azure sky, a few skimpy clouds clinging to it’s peak, I started a slow climb up into the something-or-other Bluff Valley. The road was already shimmering with heat mirages. I wondered: How many times would I have to drive on that road before I stopped noticing that incredible volcano? Did the truckers I met coming the other way still see it? Did it still take their breath away?

To my right in the distance was another snow-capped peak poking up behind the nearer mountains. I guessed that it was Mt. Ranier, a long way away. That’s the Cascades in a nutshell, beautiful strings of mountains punctuated by awe-inducing cinder cones, improbably stark and jagged against the sky, rivaled only by each other. 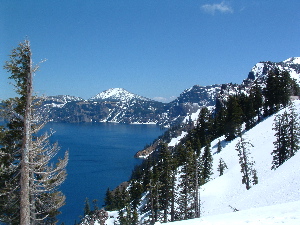 One of the most impressive of these peaks would have been Mount Mazama. The jagged remains are impressive enough, but the top of the mountain is gone. In its place is a ring of peaks and a steep-walled crater. The mountain went from being one of the tallest peaks in the world to it’s current state in a single event.

Humans witnessed this transformation. We have seen cities destroyed in our lifetime. We have seen genocide. We have not seen a mountain cease to be. One of Mazama’s sisters, St. Helen, blew a side of her face off, but that’s simply nothing compared to this. Mazma ceased to be. Perhaps all the power of man combined could rival that, but I doubt it.

While it must have been shit-your-pants unpleasant to be around the day the mountain exploded, and there were people around then, it’s certainly a great place to be now. As I climbed the slope on the south side of the mountain the snow at the sides of the road got deeper and deeper. I was driving next to a deep gorge, and there were some tantalizing side roads that probably led to some nice views, but they were blocked by snow. Only the main road had been cleared.

At the entry gate where I paid my fee I was greeted by a very friendly ranger, who warned me in advance that most of the road around the rim was still closed. When does it usually open? I didn’t ask. No matter. I had been planning to go out the north gate, which was closed, but I’m nothing if not adaptable. I paid my ten bucks and up I went.

At the top it was crowded, possibly because so much of the park was still inaccessible by car. All the visitors were crammed into a small space. I spotted some hikers as well, and even considered going on a ramble myself, but I just wasn’t equipped for it. Hiking up there requires a lot of preparation, since the weather can go from beautiful to deadly very quickly.

I found a spot for the car, secured all my crap, and climbed the small snowy bank in front of me. Judging by the number of footprints in the snow even that part of the park had not been open long. I scrambled up the few feet to the top of the embankment and there it was. For a few minutes I forgot about the camera, stopped the voices in my head, and just looked.

Then I took pictures. You can look at those. Like Yosemite, Crater Lake really is what it’s cracked up to be.