I am very, very tired. When other people are awake, there is little opportunity to write, so most of what I’m getting done is during the limited times when everyone else is sleeping. I think I got more sleep on the boat today than I did last night. I stayed up late working in the little lounge room two floors below where we were sleeping. After we all stayed up late, I stayed up later. This was partly due to the noises I knew Brutus would be making when I went back to the room.

Finally, I had no choice, and I tiptoed into the dark, silent room. Dark it stayed, but not silent for long. The specific sounds are not important, but I must say that Brutus does put out a variety of sleep-inhibiting noises.

This morning, away to the boat. Once again the ferry was late, and I caught a napita (that’s Spanish for “napette”) in the terminal while the others went in search of sun and fresh air. Finally we took a bus around the harbor to clamber aboard the exact same boat we had come out on. Ah, the memories. We spent the first part of the voyage up at the top of the boat, watching Menorca ease past; it was not until much later that I managed to get out to the walkway near the bow where we had all gathered only a few days before. I stood, felt the wind, and watched the mainland approach. I thought about stuff, but nothing revelatory or even interesting. Just thoughts, running in circles, with no place to go. 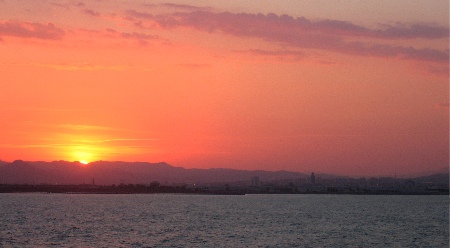 Now I am back in Barcelona (map – rough location of hotel), and there is a new character in the travelogue. While I thoroughly believe that the world needs more Bonnies, this Blog can have only one without causing confusion. I need a name that is perky, outgoing, and strong-voiced. I’ll get back to you on that. She is asleep now in the bunk across from mine. I hope she is a deep sleeper because below me Brutus is starting to warm up.

I must sleep now. Not a choice, really. Stay tuned for our new accomplice’s name.