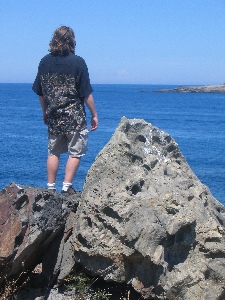 Cadaqués is in a right pretty corner of Spain, with dramatic rocky coastline, deep blue sea, and bright sun. It is a good place for hiking, and hike we did. I gave Miss Adventure control of the camera, and we spent a very pleasant afternoon rambling about. That night the city emptied and we slept in an actual hotel room, ate food from the grocery store (vegetables! rapture!) and went back out to enjoy the evening. Cassius and I ended up on bar stools in a place along the “Street of Shame”, a longish alley with several clubs on it. 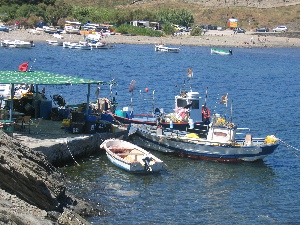 As with everything else in that town, drinks were overpriced. The closest thing to a decent deal was a list of shots that seem to have been invented by pulling the names of boozes and mixers from a hat. Cassuis amused himself by buying me a couple of them just to watch me drink them. The bartender, having no sense of proportion (although she, herself was quite magnificently proportioned), would pour equal amounts of each ingredient into the glass. The results were horrific. After the second round there was a dispute about price, which surprisingly we won after we had already given up. The prize: another round of horrible shots. Hooray for us.

The next day we wandered the town, looking for a place to do laundry and get a haircut. I had mentioned losing most of my hair, and while Cassius thought it would be amusing to watch, Miss Adventure was quite excited at the prospect indeed. We did not find what we were looking for, and ended up sitting on the pebbly beach, stacking pebbles, throwing pebbles at stacks of pebbles, and (Cassius only) juggling pebbles. I created PebbleHenge, coming soon to a photo album near you. 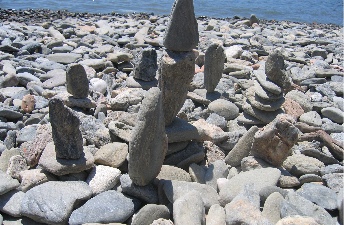 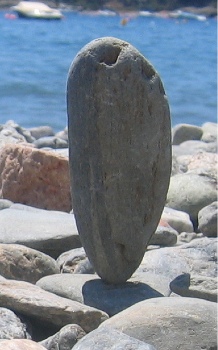 PebbleHenge detail
Then it was on to the bus and over to, uh… What’s the name of that city again? It’s got the DalÃ­ museum in it. Starts with an F. Never mind. The town has two things: A railway station and the DalÃ­ museum. The museum is right cool, and definitely worth a visit.

Wait, there’s a third thing in F-town (map). An honest-go-god barber shop. After the museum, on the evening of my last full day in the hot country, I was shorn. My hair is short. My big bushy beard is gone. Somehow my request to keep it longer on top so my hair wouldn’t stand up was inverted; I now have a bristly brush on top of my head. Next time I will specify centimeters. 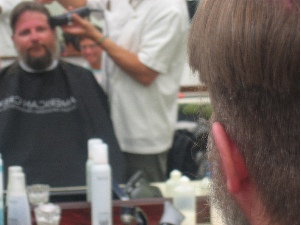 This shearing process was of great entertainment value not only to my companions but to all the others in the place. I was the biggest thing to happen to haircutting in F-town in a long time, I’m sure. That night, chatting up a pair of Uruguayan bartenders, the camera came back out to show the “before” look. I had to point out I was wearing the same shirt to convince people that I had looked that way just that morning.

Cassius and I did the aforementioned chatting in Barcelona, and we did it without Miss Adventure, who was by then on her way to Madrid. I was sorry to say goodbye; she was a fun traveling companion and a congenial friend. Now it was just Cassius and me, carefully rationing our last euros, hanging in the smoll bar (I don’t think that name is Spanish), listening to surprisingly good music (Gang of Four was playing when we first walked past on our roundabout path to our hotel, then when we went back it was Violent Femmes followed by Lou Reed. The bartender who had made the mix CD had just been to a Femmes/Reed concert a couple of days before.) So we sat, watched the two girls pour unbelievably strong drinks, and tried to convince them to come to Prague. It didn’t work — they wanted us to visit Uruguay instead. Maybe someday…

Only it doesn’t go there. The R1 isn’t running. We find this out by asking around among the locals on the platform, most of whom know no more about it than we do. We went back upstairs and found a sign that said to get to the airport we needed to get to Barcelona-Saints station, transfer to another train to another station, then get on something else to the airport. By this time we’re starting to feel the pressure. And, how to get to Barcelona-Saints? Which of the unlabeled trains passing through below, marked only by the end of their route, would take us there? Why was there no transit map within the ticket-controlled part of the station?

Finally we asked a security guard. He told us that all the trains went to B-S, and that from there we should take a bus. There was nothing written anywhere about a bus, but that turned out to be the best advice. Had it not been for Cassuis’ ability to speak Spanish, I might still be wandering the transit system of Barcelona.

When we got to the airport, we were time-crunched but not desperate — until we looked at the big board. There was our flight, with a departure time forty minutes earlier than our confirmations had said. Once we found our check-in desk (more great signage) we were told that the departure time on the board and on all the monitors was wrong. With a sigh of relief we checked our bags, made our way through security, spent the very last of our euros on food, and discovered that the gate number on our boarding passes was wrong. Fortunately the correct gate was right next door.

Back to Prague we came, back to the land of reasonably-priced food and beverage, back to the quiet streets of my neighborhood and the shocked expressions of the regulars at Little Café Near Home when they finally recognized me. As they say, all’s swell that ends swell.