I need to be going soon, to get the pups back to Los Alamos and to meet up with Jojo et. al. to go watch Zozobra. So this morning I was right here in this chair, checkin email and whatnot, generally procrastinating. Outside the window was a stack of rocks. A few feet away was another rock, and as I looked at it I realized that rock had to go on top of the stack. It went from being an observation to an obsession in just a few minutes. The rock was yearning to be put in its proper place.

Time to take the dogs out. While the dogs explored I put the rock where it so clearly belonged, a definitive refutation of Aristotle. Mission accomplished, I noticed that there was a nice flat spot on the new rock that called for another rock on top of it. Thus was a monster created. There are now five new sculptures (if I may be so bold) in the area surrounding Five O’Clock Somewhere. Well, four and a half—one’s just a little guy. 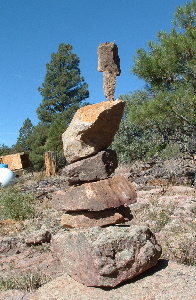 Rock Pile 1. I added the top three rocks to the existing pile. Hey, this is fun! 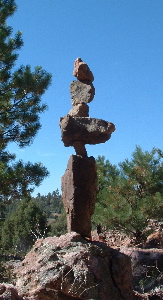 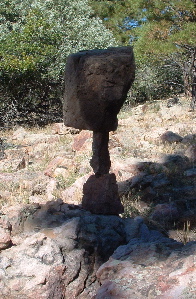 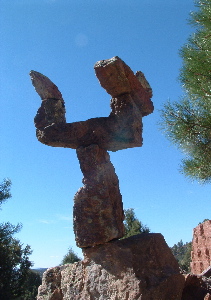 Rock Pile 4, getting fancier.
I almost knocked the whole thing down while doing “one last little adjustment”. This picture doesn’t show the structure that well, but I like its drama.

Yes, the novel is undergoing changes, reaching maturity at a frightening pace (some days frighteningly slow), and is beginning to turn from potential into reality.

As the fuzz on it’s electronic chin starts to look more like the goofy and pretentious little beard that Lit majors inevitably sport at one time or another, the story’s purposes and goals seem clearer. Still, there are the bad days, when it despairs as it looks in the mirror and sees zits everywhere, and it’s voice seems to crack and change with every sentence. On those days it wails in despair: How am I ever going to meet a nice Chick Lit looking like this? It hangs its head as each word of the lament is in a different octave.

But the novel has friends, many of whom will likely read this, and the book knows that with their guidance and faith it will reach a noble and fine maturity, one that will make us all proud.

Now, if you’ll excuse me, I’ve got a bunch of zits to squeeze.

Moonless night now here on the upper floor of the Earth. I step out into the darkness, into the humming cloudless night, and they are all there. All the names I know, and even more I’ve forgotten. Polaris, constant enough for our sorry lifespans. Antares, heart of the scorpion, named for what it isn’t. How would you like your name to be “Not John”? Alkaid, shining at the end of the handle of the Big Dipper. The name is Arabic, and means “the base” or “the fortress”. The street I used to live on was named for that star. Osama bin Laden also took a shine to the word.

Cassiopeia lies along the Milky Way, stretching her wings across the galaxy behind. As my eyes embrace the darkness she is almost lost among the clamor and light. The bears are there, diminished in reputation by the dippers they support. Draco, I never could pick out. It seems to be all the leftover stars that couldn’t fit into any other shape.

Arching almost directly overhead is the Milky Way. I look and try to turn that mysterious band into a disk of countless stars, but it is too much for me. There are enough stars I can see already.

Across the backdrop of the untouchable infinite crosses the works of man. High above but almost close enough to touch pass the blinking rumbling jetliners, crossing the sky but not daring to leave a trail behind them. The stars will not tolerate such impudence tonight. Another light moves across the sky, brightly lit as it crosses the plane of the galaxy then quickly fading. After a few seconds I lose sight of it, but I keep trying to look sideways where I think it might be, hoping to catch a hint of motion out of the corner of my eye. Whatever it was, it was big, and far above the atmosphere. ISS, I have chosen to believe. I could look it up, but I’m not going to.

Earlier tonight, driving back from a shopping run (the store closed early), our local star had just dipped below the horizon, carelessly leaving behind a rich sky full of pink and lavender. The ponds I passed stole from that palette and shamelessly reproduced it. The grass, green and haughty and still filled with the rain I had called forth, chose to contrast the colorful solar residue rather than echo it, which just made it all the better for me. I drove too fast, choosing to skim across the tops of the washboard ruts. It was good. It was thus with fondness that I said bon soir to out giant plasmic meatball, and welcomed the night.

Alone in the dark, more air below my feet than above my head, the stars blazed forth, barely bothering to twinkle. The hum of night insects surrounded me, supplemented by the vague, uncertain alarmism of Spike, who has obviously been paying too much attention to the government lately. Better to bark and have your ass kicked than to simply have your ass kicked.

The stars, and, strangely, no planet that I could identify (except Earth), continued on their vast journeys, unaware or our ridiculous fears.

You’ve heard me rant about what makes a real sport. This is a corollary to that discussion. Great sports make great sounds. A sound in a stadium must be simple and sharp. Maybe there are times when boot hits ball that soccer can create that visceral *thump* that sends a shockwave through the audience. Probably not, though.

American Football has a sound. It is the crash of two men clad in hardened plastic smashing into each other. In fact, the “protection” those men wear is designed more to make loud noises than to preserve the health of the players. Hundreds of injuries a year could be avoided if the league adopted quieter pads. So for me that sharp smash is a tainted sound. I can’t help but think that every collision could be the end of a career, or even a life, just to give me that sound.

And there are better sounds. There’s the sweet purity of the crack as a baseball meets the sweet spot on a bat. Fielders listen to that sound and play the hit accordingly. The sound is not just something for the fans to enjoy, it’s a critical part of the game. Should the Majors stop using wood bats, I’d stop watching. I love that sound. Subtler, but equally important, is the sound of a strike-three fastball burying itself in the catcher’s glove. POP! “Thureeeeee!” Beauty.

That’s not my favorite sound, however. In the same category as the well-struck baseball is the slap shot. Crack! Hockey is full of great sounds. There’s the schuuuus of skates at full brake, there’s the crunch of bodies at midice, there’s the blammo of bodies into into the boards, and the whistles of irate european fans. Then there’s the sharp crack when stick meets puck with a force so huge the stick sometime breaks. Bam!

But as great as that snap is, there is one sound more powerful in sport. When that enormous crack! is followed by a resonating piiiiiing! you know deep in your heart that nothing could have been closer. In a live and die world where fate is decided by the dimensions of a hard rubber disk and the arbitrary diameter of the metal that supports the net, that sound is a call to prayer. That sound will drive the fanatics of both teams mad. It is the sound of victory and the sound of loss. It is the decision of the Gods of the Bounce, against whom we will never argue but at whom we will always curse.

There is no other sound in all of sports that comes close.