Has it really been so long?

If you own a nimble little car, particularly a convertible, put Sonora Pass on your bucket list. Be sure to note, however, that it is closed more than half the year. At almost 3,000 meters above sea level (officially 9,624 feet), it’s just not possible to keep the road open year-round.

I drove the pass once, many years ago, and this time the memories came flooding back. The place where I passed the slowpoke in a VERY short passing zone. The guy just wouldn’t pull aside, through there were ample opportunities. Then there was the place farther up when I had to shift down to THIRD (I have a six-speed), and briefly to SECOND, because the grade was so extreme and I didn’t want to lose momentum. I remembered the smell of burning brakes coming off the vehicles coming down, vehicles that probably shouldn’t have been there to start with.

Another corner, farther up, that I didn’t remember but now I will, as it hairpinned around to the right, steeply up, and I kept the accelerator to the floor to keep momentum and steerage but needed both hands to steer as I discovered myself in the wrong gear. It’s the kind of moment automatic-transmission drivers will never know, for better or worse. There were some people in a pullout there, and they probably heard my steadily-increasing-in-pitch “WoooooooooOOOAH!” as the full glory of that curve became apparent to me.

That was about the time Sammy Hagar’s “I Can’t Drive 55” came on the radio. I had to laugh. 55 mph would not be happening for a while.

I pulled over where there was a good view of the road below me. It was a long way down from where I stood to the rushing river in the valley below. I stretched, took in what oxygen was available, snapped a couple of unintersting pictures. The slope of the ground beneath my feet felt odd; paved surfaces aren’t supposed to lean like that.

Back in the car, around a bend, and a better place to stop. My foot twitched between brake and throttle, indecisive, but I decided to pull over again. “Taking it slow, today,” I reminded myself. “Smelling the roses. Only planning to get as far as Tonopah.”

I pulled over again, stood on a rock and fired up the panorama feature on my phone. At this time, I’m unable to upload the result. I’ll get on that real soon. After a few more moments to appreciate the view, I hopped back in the car.

Not much farther up the snow pack started to become significant. The snowplow cuts through the banks at the side of the road were obvious. My memories of my last time through the pass don’t include snow. For a few miles, the best potential camera shots were from the perspective of the road; one seldom-discussed advantage of convertibles is the ability of one to hold a camera up over the windscreen and get a good shot.

Touch-screen controlled cameras suck for this purpose, however. Even when using the hardware button to trigger the picture, too many knuckle-brushes against the screen change modes and settings, and while I could spare a hand occasionally, I could not spare my eyes to ensure that I had taken a shot. At one point I pulled over to review my work and I discovered I was in time-lapse mode, with a sped-up view of my lap. Then I was in some sort of ease-in-out-slow motion video. I just wanted a dang picture. 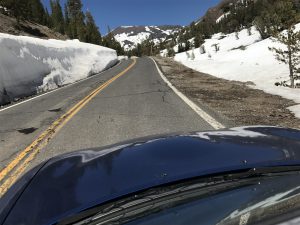 Just over the top, maybe two miles on, a bicyclist was stopped at the side of the road, heading up, lights flashing fore and aft. He was straddling his bike, clearly gassed, panting through a salt-and-pepper beard. “Almost there!” I called out, hoping he took it as encouragement. I looked at my clock. Early afternoon. I wondered when he has started his assault on the pass that morning. He was a long way from any potential base camp I knew about. Maybe I should have offered him some cookies, or a Gatorade. In hindsight I think I could have been more helpful.

More memories as the road wound back down, and a curve carved with luck-fueled precision, the suspension squeezing and releasing in synchrony with the bank of the tight curve, the tires whooshing loudly but not squealing, the car shooting ahead as I downshifted to take some of the load off the brakes. I was redeemed for the curve that had taken me by surprise on the way up.

There’s a military base just beyond the steepest part, on the first flat piece of ground. As I passed one crew was paving the helipad (a road sign warned drivers of dust kicked up by helicopters), while another fatigue-clad bunch sat on a ring of boulders, facing the man addressing them, the way kids at camp might sit in a circle and listen to their counselor tell a story. My first time through, when my car was much younger, I had noticed that the propane tanks on the base were painted light olive, rather than white. I spent many miles pondering the logic of that. Was white not the best color? I always assumed white was intended to absorb less heat from the sun. What possible threat would be mitigated by painting the tanks pale olive?

There was more to my drive yesterday, but past the military base it does not qualify as Sonora Pass anymore. Sonora Pass is a wonderful drive, rivaled by few other stretches of road in this very large country of ours. It felt good to renew our acquaintance.