While we’re on the subject of photography, I’d like to share this bit o’ serendipity. I got this picture while testing some of my new flash gear: 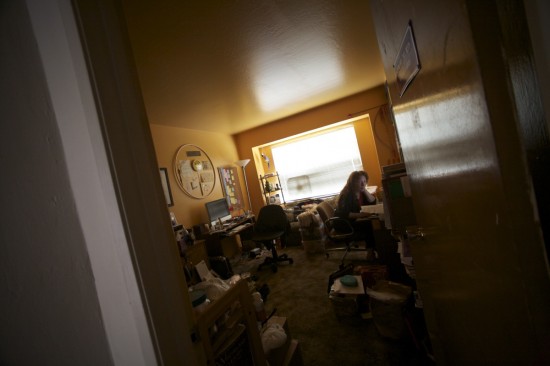 My Sweetie running her eBay empire

It’s a little dark but if you click on it to see it larger it works.

“But Jerry,” you say, as your ever-vigilant eyes scan the above photo, “there’s no sign of any flash in that picture at all.” And right you are, Sparky! The strobe was set up out in the living room. “But if the flash is in a different room, how is the picture possibly a test of that flash?” you ask, unflagging in your quest for a more perfect understanding of the world around you. Good on you!

To make a short story long, recently I was doing a shoot with my sweetie and the strobes stopped popping, right in the middle of the shoot. The cable from the camera to the master strobe was bad, and if it weren’t for the fact I had another the shoot would have been a major pain (back to lighting with desk lamps). These cables fail pretty often, I understand, because as you move the camera around the connectors are constantly being loosened. Even the guys who preach not spending a single unnecessary penny on gear recommend getting good radio transmitters to fire the flash units.

So, this picture was taken the day the new transmitter and receiver arrived. I had a flash set up in the living room and I was seeing how far away I could get and still have the flash go off. (The answer to that: not very far. The radio worked fine, but it’s a very small apartment.) So I shot the above from my hip (quite literally), with no intention of keeping it.

But, when I looked at it, I liked it. If you look really closely you can see there’s some camera shake, but overall it looks pretty good, if you ask me. So, enjoy!