It took a little longer to shake off the cobwebs this morning, a combination of getting used to the time zone and (more significantly) staying up too late last night. I didn’t have all morning to lie about, however, I needed to be fed and ready at 8:15, when the family was gathering to get our instructions for the trip to Kyoto. Thirty minutes later I had a number 16 affixed to my chest and we were on our way. 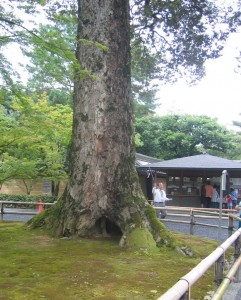 Our guide, with carp, near a big tree

The trip started with a coach ride from the port of Kobe to Kyoto. The guide of coach 16 was a friendly fellow with lots of interesting stories about the little things that give a city its character. I didn’t hear all the stories; I was seated in the back, next to Obnoxious Italian Guy. The coach was full, and Obnoxious Italian Guy and his girlfriend simply needed more space than the seat provided. Not because they were big, but because he in particular was animated. He sat semi-sideways in the seat, using my shoulder as a back rest, and laughed and joked and waved his arms in a culturally-correct manner, and generally annoyed me. If I had said something he probably would have been quite all right with that; my quiet annoyance was probably just as culturally abrasive to him as his space-invading histrionics were to me.

In any case, we got to Kyoto. Our first stop was a Buddhist temple, built by a powerful Shogun and cousin of the Emperor. Before we got off the bus our guide showed the baton he would carry. At the end were two mini carp kites. “Follow the carp,” he said. He reminded us again when we were mustering after getting off the bus, where another tour guide was giving the same advice to her group, holding up an almost identical carp-festooned baton. 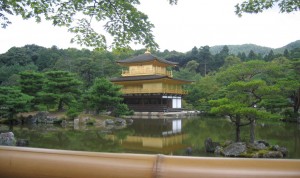 The Golden Pavillion, built by some shogun guy in Kyoto Japan

The place was was, as you might expect, beautiful. The most striking building was the golden Pavillion, a three-story structure. The upper two stories were covered in gilt which reflected in a still pond, while the ground floor was dark wood. “It is best when it is raining,” our guide said. He moved his hands to indicate a downpour. “When it is raining very hard. Then the upper part seems to be floating in the air. Very beautiful.” It was hot and humid; I hoped for rain, but no such luck.

We toured the grounds, pausing to hear stories of carp transforming into dragons and so forth. Almost right away my camera battery gave out. That was OK, I was surrounded by photographers. I concentrated on looking around.

All too soon we were done with the place, and I felt for the first time the downside of a group tour. We were in a place of quiet contemplation, a place designed explicitly to be a good place to sit and think (or not think). But, I was with forty other people and we had places to go. A tour can hardly schedule time for forty antsy tourists to stop for a moment, breathe, and feel the harmony of the surroundings permeate their own souls. We got back on the bus. 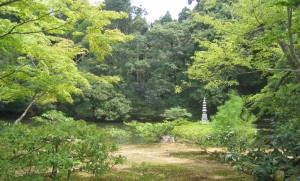 A small shrine in a Zen garden, Kyoto

We drove past the Emperor’s Palace grounds, over the river where once thrived kabuki and brothels, to our next stop, a Shinto temple. We were instructed in the proper cleaning ritual, a symbolic preparation to enter the place and in itself a sort of prayer. I tried to get myself in the proper frame of mind as I washed left hand, right hand, mouth (cover your mouth when you spit the cleansing water back out – do not show God your teeth), then finally the handle of the water scoop, to make it ready for the next person.

Thus cleansed and in the proper frame of mind we entered the temple grounds. The buildings were massive and brightly painted. The place was a half-sized replica of the Emperor’s palace, which was burned down a century or four ago. Our group crunched over the white gravel of the grounds and approached the main shrine, which houses the spirits of not one but two great Emperors. We bowed respectfully, clapped, and made our wishes. (I did not wish for anything as base as a cooling rainstorm.) One can also purchase fortunes at the temple, not all of which are good. There are trees white with the fortune slips, as people who are not happy with their fortune will tie it to a branch and get a new one. 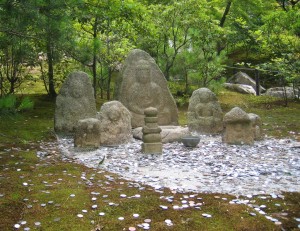 Get your coin in the bowl and go to heaven!

Back on the bus half an hour later and on to the next stop, a famous market street bursting with fresh seafood, intriguing snacks, enticing aromas, and the vibrant energy that any good market has. (Remind me to look up the name of this street.) Then it was back on the bus once again for a trip to a fancy hotel for a buffet lunch with dozens of dishes, from the familiar to the mysterious. I ate too much, trying to balance exotic and mundane. The afternoon included a visit to another, particularly cool temple perched on the hills overlooking the city, and time to shop in the streets that lead up to the temple.

I was feeling a powerful thirst, so I paused and drank a beverage called Pocasi Sweat (or something like that – “sweat” was in the name). It is what Gatorade used to be before it got sweet — a not-very-tasty-but-effective thirst quencher that replaces electrolytes. It was indeed refreshing.

Finally, we went to the train station and boarded the Shikansen (rhymes with ‘bullet train’) back from Kyoto to Kobe. According to fuego’s GPS-phone, we reached speeds of almost 280 km/h, the maximum the train is allowed to go in urban parts of the country. The trains don’t stop often and when they do it is not for long; we were warned by our guide that while the train would stop for almost two minutes in Kyoto, in Kobe we would have only a minute to get off. I think our huge group delayed departure a few seconds. Hopefully they were able to make up the time on the next leg.

Back in Kobe we boarded a different bus and were shuttled back to the boat, tired, pleased, and just a bit frazzled, considering all the places of peace and tranquility we had stampeded through. Better to stampede, though, than to not see it at all.

Here is part two of the epic video chronicling my attempts to turn carp into something to eat. I really didn’t feel very sharp as I was shooting this, so the humor is even more sparse than in the first one. In true Hollywood fashion I tried to make up for a lack of substance by increasing production values.

Here is the extended version of the previous video, giving you the entire day’s exploits. The story is not finished – oh, no. Not by a long shot.

I learned a few things – first, give the camera plenty of time to get rolling and dont hit stop until long after I’m finished. But overall I really didn’t learn much about cooking carp.

Production for the rest of this documentary might be tricky, as I won’t be able to film while I’m actually doing things. It will be more like a montage. I certainly don’t have the skills to make a stop-action animation out of it – but that would be cool.

Yesterday Otakar, my landlord, asked me “do you have carp?” Not whether I wanted carp, because how could anyone not? He was concerned, however, that somehow I might have found myself in the unfortunate position of not having any. He then went on a fairly long discourse which I think was cooking instructions.

So now I have a rather large, not very tasty fish in my freezer. The recipe that appeals to me most so far is for pickled carp, but of course that one has the longest list of ingredients I don’t have. Most of the recipes I’ve seen involve vinegar; obviously that’s the key to reducing the carpiness of the fish.

This morning I woke up with a head full of ideas, scenes and interactions, motivations and conflict. I couldn’t wait to get to work. When I woke up this morning, I was a writer.

What happened yesterday that would make today so exciting? Ten thousand words. NaNoWriMo is drawing to a close, and I was way behind. It was either punt or prodigy. Sunday evening I clocked four thousand words. Not a bad day’s work. Then there was Monday. I still had momentum coming off Sunday, but it was almost noon when I started. By midnight I had 10,000 new words, plus change. At that rate it would take a week to produce a draft of a typically sized novel. The best part of days like that are that when the paragraphs start piling onto the page one after another, they’re usually pretty good. Today I woke up and all I wanted to do was keep going. Man, that feels good.

I didn’t really get any lift from last year’s NaNoWriMo, and this year I was almost at the end before it happened, but here I am, less than twenty-four hours from a transatlantic flight, I haven’t packed, I haven’t cleaned my place, I haven’t bought locally unique Christmas Crap, and all I want to do is keep writing. Just like old times.

I’m heading to distant shores later today, and in my classic fashion I managed to completely squander yesterday. I plead extenuating circumstances — I was out with Soup Boy, Izzy, and Little John Friday night and while the night wasn’t excessive (at least for me it wasn’t), it did run late. After walking most of the way home I realized the day trams were running. So, yesterday I was pretty tired.

Rather than photograph sidewalk carp vendors and track down an electrical adapter so I can keep my array of battery-powered items running in the Islands of Misfit Electricity, or even do simple tasks like catch up with email, I watched cartoons. (For those keeping score at home, I watched Chobits, an anime that fails to have the weight of a serious show or the charm of a silly one. It does involve a robot with special powers, which of course looks like a teenage girl (rhymes with Japanese). The story is pretty much the same as Pinoccio, but instead of a marionette the main character is a robot who wants to become a Little Girl Superweapon.)

In the late afternoon I took a nap that lasted until this morning. Now I feel pretty good, but there’s a lot to do between now and departure.

Speaking of carp, my landlord knocked on my door yesterday and gave me a big chunk of the stuff. “Kapr,” he said, as I hefted the plastic bag. “Ryba,” he expanded in my moment of confusion. Then the light turned on and I realized he had just handed me several pounds of frozen, not-very-tasty fish. Still, it was a nice gesture. I thanked him with enthusiasm that lasted for about fifteen seconds. What the hell am I going to do with this? I asked myself as opened up the fridge, and then made things more complicated by breaking the handle to the freezer compartment. There’s a lot of carp in there now. It’s frozen, but they might be working on the wiring while I’m gone, which leads to nightmare scenario #48, freezer filled with rotting animal when returning from Christmas travels. That hasn’t happened to me since I was in college, but the memory of that incident has left me scarred for life.

So, anyone want some carp?