Well, probably not. The world isn’t likely to break until 2017 at the earliest. Here’s the thing: Our economy relies on secure electronic transactions and hack-proof banks. But if you think of our current cyber security as a mighty castle made of stone, you will be rightly concerned to hear that gunpowder has arrived.

A little background: there’s a specific type of math problem that is the focus of much speculation in computer science these days. It’s a class of problem in which finding the answer is very difficult, but confirming the answer is relatively simple.

Why is this important? Because pretty much all electronic security, from credit card transactions to keeping the FBI from reading your text messages (if you use the right service) depends on it being very difficult to guess the right decoder key, but very easy to read the message if you already have the key. What keeps snoops from reading your stuff is simply that it will take hundreds of years using modern computers to figure out your decoder key.

That may come to a sudden and jarring end in the near future. You see, there’s a new kind of computer in town, and for solving very specific sorts of problems, it’s mind-bogglingly fast. It won’t be cheap, but quantum computers can probably be built in the near future specifically tuned to blow all we know about data encryption out of the water.

Google and NASA got together and made the D-Wave two, which, if you believe their hype, is the first computer that has been proven to use quantum mechanical wackiness to break through the limits imposed by those big, clunky atoms in traditional computing.

Pictures abound of the D-Wave (I stole this one from fortune.com, but the same pic is everywhere), which is a massive refrigerator with a chip in the middle. The chip has to be right down there at damn near absolute zero. 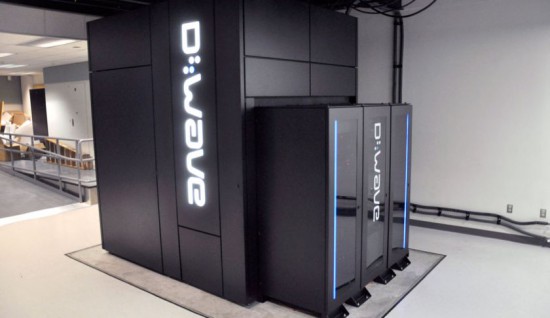 The chip inside D-Wave two was built and tuned to solve a specific problem very, very quickly. And it did. Future generations promise to be far more versatile. But it doesn’t even have to be that versatile if it is focussed on breaking 1024-bit RSA keys.

It is entirely possible that the D-Wave six will be able to bust any crypto we have working today. And let’s not pretend that this is the only quantum computer in development. It’s just the one that enjoys the light of publicity. For a moment imagine that you were building a computer that could decode any encrypted message, including passwords and authentication certificates. You’d be able to crack any computer in the world that was connected to the Internet. You probably wouldn’t mention to anyone that you were able to do that.

At Microsoft, their head security guy is all about quantum-resistant algorithms. Quantum computers are mind-boggling fast at solving certain types of math problems; security experts are scrambling to come up with encryption based on some other type of hard-to-guess, easy-to-confirm algorithm, that is intrinsically outside the realm of quantum mojo. But here’s the rub: it’s not clear that other class of math exists.

(That same Microsoft publicity piece is interesting for many other reasons, and I plan to dig into it more in the future. But to summarize: Google wins.)

So what do we do? There’s not really much we can do, except root for the banks. They have resources, they have motivation. Or, at least, let’s all hope that the banks even know there’s a problem yet, and are trying to do something about it. Because quantum computing could destroy them.

Eventually we’ll all have quantum chips in our phones to generate the encryption, and the balance of power will be restored. In the meantime, we may be beholden to the owners of these major-mojo-machines to handle our security for us. Let’s hope the people with the power to break every code on the planet use that power ethically.

Yeah, sorry. It hurts, but that may be all we have.