Time is moving just too dang quickly for me to put up an episode a day, so I’m trying a different approach and doing things by theme. Today’s episode is about driving around. You do a lot of that in New Mexico, and when you’re trying to get everything together for a movie you do even more.

Friday fuego and I went up to Santa Fe to meet with the Air National Guard. It was a good trip, and productive. We met with Major Bob, who was enthusiastic about the whole thing but didn’t have a whole lot of authority. He took is to meet Colonel Montoya, who has only a sketchy idea of what it was we wanted to do. We explained it, discussed location and altitude and other logistical issues. The good Colonel paused, thought, and said, “Yeah, I don’t see why not.” 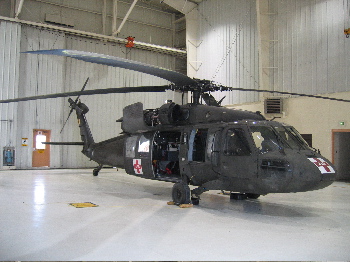 Ladies and gentlemen, out latest prop: A blackhawk helicopter. It will be at our disposal at oh nine hundred hours Tuesday morning for a flyby or ten.

So that was a good day. Yesterday we were on the road again, scouting locations for the b-cam to go to shoot some road, and taking stills to supplement the ones I had already taken for the opening title sequence. The morning was hot and bright when we reached Trinity site, the place where the first atomic bomb was detonated. The place is not open very often, and even if we couldn’t get anything interesting for the flick I was interested in seeing it.

In fact, there isn’t much to see except a bunch of other people standing around thinking that there isn’t much to see. The glass-lined crater has been filled in except for one part where a shed was build to expose one section of Trinitite – the name for the glass created there when the sand of the desert was melted by the blast. We moseyed over to the shed, where there was a door in the roof to provide a view of the crater. Instead we found the door shut, with a sign that said in effect, “This used to be a way to see the crater floor, but now it’s covered with sand in there, so neeners.” 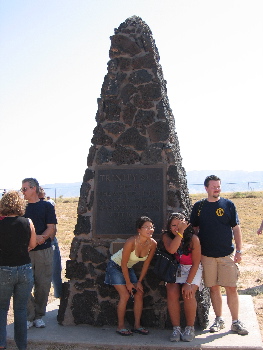 There is an obelisk at ground zero, and we spent several minutes waiting for a moment when we could get a shot without some other tourist standing next to the black volcanic obelisk. Everyone wanted their picture next to the thing, although no one read the inscription, or really seemed to consider what it stood for. It was just that there was nothing else to take a picture of out there. After a few minutes fuego did manage to get one without other people in it, but most of the time the place was like this picture. 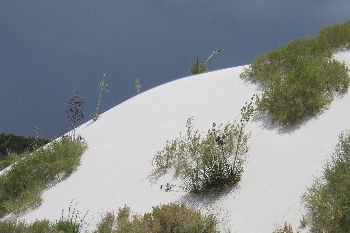 Trinitized and armed with photographs we hit the road again, heading down to White Sands to get some more beauty shots and to get pure clean gypsum sand between our toes. As we headed south we saw thunderstorms forming over Alamagordo and heading in the general direction of White Sands. Not ideal for our photos, but certainly cooler. After pausing in the gift shop so fuego could get a White Sands cap so he could be cool like me, we headed out to the dunes. 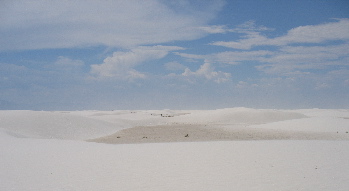 We kicked off our shoes and tromped out while raindrops blew in on the gusting wind. There was a good chance we were going to get very wet. As the wind flowed over the contours of the dunes it created a halo of sand, softening the edges of the snow-white dunes against the threatening sky. Lightning would flash in the distance and the rumble of the thunder would roll across the desert for an improbably long time. We tromped around, took pictures (only a few of which didn’t suck) and generally had a good time. 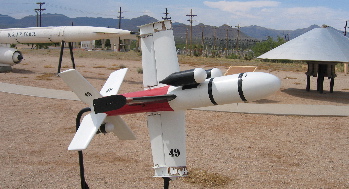 After White Sands we continued our research at Missile Park, part of the White Sands Missile Range. The folks were right friendly there. The museum was closed, but there is a little outdoor area with a variety of the rockets, missiles, etc that had been tested there. We took some pictures in case a pirate needed to come up with an anti-tank missile. The one pictured here was my favorite – it looks like it belongs in an episode of Speed Racer.

Finally we headed back north, back to the duke city, hot, clammy, coated with sunscreen and sand, and tired as can be. We stopped by Rudy’s house for Yet Another Location Crisis, and that left us all even more drained. I was in the perfect mood to go home and just read a book for a while, or work on edits to a short story. Instead we went over to Charles the First’s place to discuss the opening sequence. I’m taking it a bit easier today, trying to shed some of the stress I picked up last night.

19 thoughts on “Around the State”