Yep, a picture I took found its way to a print publication that people pay to read. The photo is of Harlean Carpenter (who is a fiction), and the publication is Bachelor Pad Magazine. While I can take but a tiny amount of credit for the appeal of the shot (most of it comes from the model, obviously), I’m still pleased to have helped out. 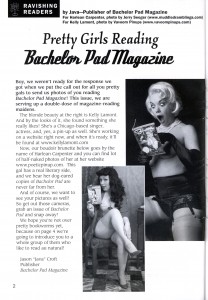 The magazine itself is pretty cool. It’s a small operation, a labor of love, and worth a look – especially if you’re a fan of pinup-style photography. “For Mature Readers” it says on the cover, which is what separates it from Maxim and the rest of that lot. In the most recent issue is an article about Naked Girls Reading, a… show? performance? franchise? in which women with no clothes on read literature out loud.

It’s a bit off-topic but one of the advertisers in this month’s issue features a photo of Shelby, who is “adorable” in the words of the fictitious Harlean, and who also happens to be bicycling a bajillion miles (give or take) in the near future to raise money to fight diabetes. Oddly buried is the fact that donations will be matched by Dignity Memorial Network. Your generosity will be doubled! Currently Shelby is way behind her friends in fundraising – help her catch up!

If that one’s not your cup of tea, Harlean keeps a list of noteworthy charity events at her blog: http://poeticpinup.com/Fundraisers.html.