The rebuilding of the kitchen is mostly done. Most of the appliances are back in position, if not yet functional. The countertops, which we pitched in extra cash to upgrade, look fantastic. With much of the kitchen back in the kitchen, we had enough space in the living room to do a little Christmas shoot in front of the fireplace. Good times!

Someday, we’ll have the studio unburied. But the fireplace made a nice little set, complete with a mirror to cause trouble: 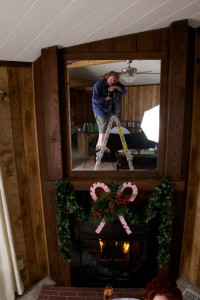 A quick self-portrait while shooting Harlean Carpenter (who is a fiction).

It’s not Christmas without bubbly, so we got a bottle of cheap stuff and as the talent arrived on set I poured a glass and set it on the bar. I realized it was the first beverage on the new bar! Hooray! After the shoot I turned the camera the other way and tried a few snaps. Here’s one of the better ones (of course, you can click the image to biggerize it): 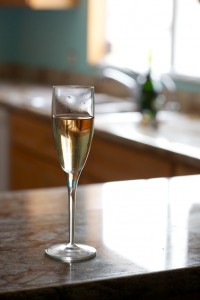 Only fitting it should be bubbly, considering what we went through.

A couple of technical notes: This shot gave me a chance to play with the aperture and decide just how blurry I wanted the background to be. In some images you can make out the bottle in the background fairly clearly, in others it’s just a hint of something green. I was using the “Av” setting on my camera, which allows the photographer to choose the aperture then the camera figures out the rest. However, this time I finally had to go to full manual to get the exposure the way I wanted it. Not counting shooting with strobes, I’m pretty sure that’s a first for me.

There was another shot with a better exposure that showed off the countertops better as well, but it really showed the smudges on the glass from being handled for an hour or more. It’s the details, man. They get you.

The other first today was the aforementioned fire in the fireplace. It only occurred to me to commit the event to the collective digital memory after the “log” had burned down to where only a wisp or two of flame were clinging to the charred remains. My plan was to try a whole range of exposure times to compare the effects, but after my third frame the flame went out completely. Here’s the first shot I took, with a five-second exposure: 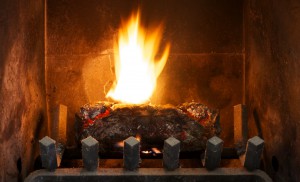 After years with no fireplace, it was nice to light up today.

5 thoughts on “A Couple of Firsts”