“Moonlight Sonata” leans heavily on two elements (give or take): locations and music. When we heard that zlato knew some skilled musicians who owned their own place and only opened it once a month or so when they had concerts, I allowed myself to get pretty excited about it. Purely by luck, there was a concert there the day after zlato found out what we were looking for. Attendance, of course, was mandatory.

The morning started out under the shadow of the previous night’s beers, and the last wheeze from an annoying head cold I’ve been carting around. (An aside: on mornings like that I ask myself, “why don’t I have any aspirin in the house?” There is a drugstore literally a stone’s throw from my house. Yet once I’m out and about the hassle of figuring out just what to get outweighs the future benefit. It takes me a good twenty minutes to choose a medication even when I can read the labels. So I tell myself I’ve made it this long in this country without ever setting foot in a drugstore and I may as well keep the streak alive. Who knows how much productivity I’ve lost for lack of a bottle of ibuprofen?) Anyway, I slept very late, schlepped around, and when the appetite was finally back I went down to the local Chinese place and wrote the previous blog episode. From there is was tram 11 up to fuego’s, and away we went.

zlato (rhymes with gold, by the way) had emailed the information on how to find the place. He had mentioned several times that the place was always packed, and the email advised arriving by 20:00 to get a seat. I figured showing up even earlier couldn’t hurt.

It turns out this was a short-notice event, and we were the first ones there. We poked around and discussed what it would take to make the place look right for out project. 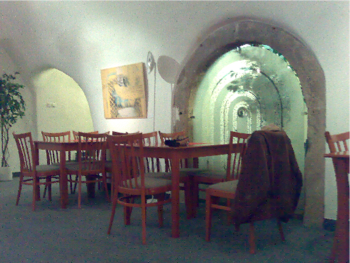 Unfortunately it turns out that the answer to that is “quite a bit.” The place is the right size, but it’s too clean and too white for the sort of dive where an old bluesman would play his last concert on this Earth.

Still, at least it’s there, and it has musicians, to boot.

People began to arrive in dribs and drabs, and we got our first look at the guitarist for the band, someone we hoped might be a candidate for the role of Old Ray, the bluesman. Not a slam dunk by any means, but there was definitely potential there.

(My apologies, by the way, for the quality of the photos; I was using my phone camera and there’s only so much it can do in low light.) 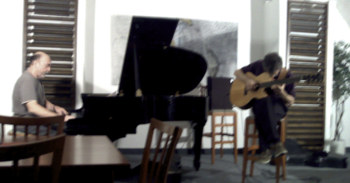 The band at work

The place had perhaps twenty-five people in it when the show started. Tonight it was just pianist and guitarist; the drummer was apparently one of the many regulars who couldn’t make it to the show. Right away I knew I was going to have a good time. When you go to a concert billed as ‘jazz’ it can fall anywhere on the spectrum from “so boring it’s not music” through “inoffensive” to “good” to “great” to “so random it’s not music.” Happily, while musically very ambitious at times, Tony Ackerman (guitar) and Martin Kratochvil (piano) never went so far over the edge to where one needs a doctorate in music theory to appreciate it. It was also obvious that they really enjoyed what they were doing. Some of the music I recognized, other bits were original. Tony is American(ish) and enjoyed talking to the group and the whole place had a friendly vibe. 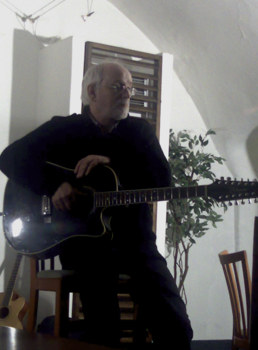 Then we came to the reason for this hastily-called show: it turns out that it was the 40th anniversary of the immolation of Jan Palach, a student who burned himself to death to protest the Soviet invasion of Czechoslovakia. A freind of Tony’s is a musician who wrote protest songs back in the day and wanted to mark the day. Bohdan Mikolášek’s songs were in Czech, of course, and most of the audience was English-speaking, so he spent some time before he started talking about the time, and what some of his lyrics were. Some of the most poignant came from the song “ Ticho, which was about Palach, and the quiet acceptance of the invasion he struggled to end. “A living man died, but the dead live on.” Lots of good imagery in his lyrics as well.

After the show he paused to talk with fuego and me. He is distressed about the way the world is going, about what it remembers as what is forgotten. For instance, he said more than once that he doesn’t think Jan Palach was a hero. It’s not his act we should remember but the apathy that brought him to that act. We should remember a world where it took some guy doing something like that to wake everyone up. Are we all sleepwalking, waiting for the poignant “heroic” act to get our asses in gear?

All of which has nothing to do with finding locations and talent for “Moonlight Sonata.”

During the post-show milling-around period I introduced myself to Tony, we chatted for a bit, and eventually fuego brought up our project. The venue is definitely a possibility, but Tony immediately took himself out of the running for being the bluesman. He did give us a lead though, a name that sounds vaguely familiar to me. He’s a yonger guy, but if he can move old it might work out.

In the end, it was a good show, but provided no answers. fuego and I wandered the town for a bit, looking first for a couple of places fuego thought might be worth looking at. The one he was most excited about showing me was closed. After that we decided to repair to Pizzeria Roma for a planning session. On the walk I realized (again) how out-of-shape I am, but once in the friendly embrace of the all-night pizza joint (complete with time-warp capabilities) all was well. We ate, discussed the three (rhymes with Holy Cow!) vodeo projects we want to get done in short order, considered Roma as one of the locations (could do a lot worse), and generally had a good time. When I left fuego was still there, chatting with the locals, and when I left I caught a day tram home.