Got a build done for the client and got onto the road about 2:30 – not as early as I would have liked. I came down into Colville and gave Bob a call to thank him and decided to grab a quick bite at McDonalds. It was not a quick bite. I waited in line, trapped by the cars behind me, for several minutes. When I reached the order box what I heard was “Sorry for the wait. I’ll be with you as soon as I can.” Finally it was my chance to order. “I’ll just want a Quarter Pounder with no cheese and a medium Coke,” I said. I watched on the panel (to ensure accuracy) as she rang up a quarter pounder with cheese, hold the cheese. I thought of trying to explain to her what she had done, but at that point it simply wasn’t worth forty cents to me. When I got to the first window, the 50ish woman took my money and apologized for the delay. Not all McDonald’s are the same. Some are worse.

On the road at last, burger sitting heavy in belly and caffeine increasing my heart rate, I took Highway 20 east out of town. At the outskirts of town there was the faint smell of skunk, my totem animal if they’ll have me, and I decided that was a good omen. I had put on plenty of sunscreen while waiting in the drivethrough, so I was protected. I put Stiff Little Fingers in the CD player and blasted Suspect Device.

At mile 3490.2 (kilometer 5628.2) I was quizzed briefly by a nice Canadian Customs lady and I crossed into Canada. I have never been to Canada before, so I was pretty excited. The only real changes I noticed were the speed limits were in km/h, and one in four cars had Calgary Flames flags attached to them. 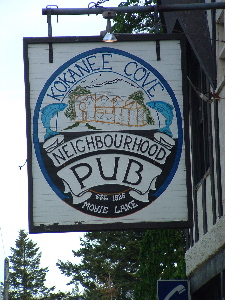 I followed a route recommended by Bob, largely on the strength of a bar he liked. Traffic was not bad and I made good time, arriving at Kokanee Cove Pub at suppertime. I looked over the menu and decided to splurge a bit – I had to have the barbecue prawns in secret butter sauce (I a sucker for secrets), but that didn’t seem like a meal so I had the steak and prawn combo. Of course, I also ordered a beer. The beers seemed a little on the pricey side until I realized that these were Canadian Dollars. Woo Hoo! That was like 20% off or more right there.

After dinner I made the short trip up to Cranbrook to find a place to sleep. I searched high and low for high-speed Internet but without success. The responses ranged from “We don’t have any access to the Internet of any kind,” to “We’re planning to put that in soon” to “We have two rooms with the Internet, but they’re both taken” and finally “We have one room left with high-speed. It’s a Jacuzzi suite and it’s $350.” That’s too much even in Canadian dollars. Finally I just gave up and went somewhere cheap near a bar.

I ended up just going to the hotel bar instead of the one I saw next door. My laptop battery was dead and the hotel lounge was deserted, so I knew I could find somewhere to plug in. It worked out well, too. They had a good pale ale on tap for a good price (unusual in hotel lounges). I had four of them over the next couple of hours and as you may be able to tell from the last episode, written while I was there, I got pretty loopy. That must have been a pretty potent ale. I went back to my room and tried to connect to AOL, but I couldn’t figure out which numbers were local.

I woke up in the wee hours still on top of the covers, shoes on, an arm over my eyes to keep the light out. I want to know what my waitress put in that beer.