When Soup Boy moved out, he left a legacy behind. Nothing major — some dead flowers, some rocks, a few other odds and ends. I’ve long since taken care of most of those things, but after the disruption caused by the Great Flood of ’06, I was confronted once more with an odd assortment of pebbles and small stones. They ended up on the table where I put my laptop when I’m using it at home. So there I sat this morning, reflecting on the irony that it was the rocks that I was having difficulty getting rid of. I couldn’t put them in the yard, because the landlord would run over them with the lawn mower. Just putting them in the street seemed irresponsible, and putting them in the trash wouldn’t be nice to anyone. 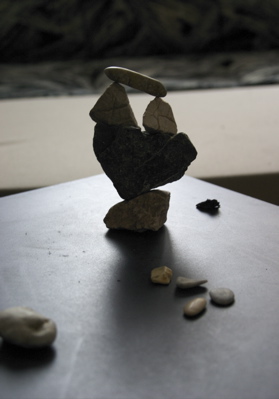 Rock Stack SBL-1. Nothing mind-blowing, but likely the first of many.

This morning I was mulling this oddity of modern life, asking myself where I could put the rocks when I realized one particular rock clearly belonged on top of one of the others. I stared in disbelief, stunned that I had not noticed that simple fact before. After a few fairly aggressive stacks tumbled I relocated the operation so that I was not working my near the glass coffee table, and that was pretty much it for my morning.

Stacking small rocks is noticeably different than stacking large ones. The biggest difference is that the tiny adjustments you make to adjust the balance have a much more dramatic effect on a small rock, and even the smallest disturbance can have catastrophic effect. Getting all the pieces to work together can be tricky. On the other hand, it only takes a little bit of friction to keep a small stone at an improbable angle. The biggest advantage of the small stones is obvious when the stack falls over.

Eventually I got a stack that was fairly stable if not particularly breathtaking, and before I added the One More Thing I hauled out the big camera, tiptoed around the apartment while the batteries charged up, and then snapped a few picks. Maybe I can hone my rock stack photography skills as I practice my rock stacking.

Of course, then I tried to add the One More Thing and the stack collapsed, but that was all right. The rocks are still there, waiting for me.