It showed up in my Facebook feed the other day: “Co-author a book with James Patterson!” That got my attention; although many of Patterson’s co-authors are really, really bad at their craft, you have to figure that the exposure and automatic best-seller listing have to be good for a career. Even the abysmally horrible Michael Ledwidge now has twenty listings over at Amazon (all with Patterson’s name on them as well), and I have to figure he’s doing pretty well for himself. 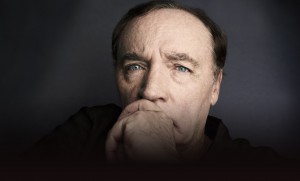 The man, the myth

Patterson (if he’s not being held in a cryogenic cylinder by his agents while they squeeze every last dime out of his name) seems all right with putting his name on horrible books. For that reason I’ll never pay for anything with his name on it.

But would I co-write a book with his name on it? Hell yeah! I’ve got something that would knock his socks off. It doesn’t quite fit his cookie cutter (more on that shortly), but it’s close enough to pitch.

So, knowing I was just encouraging the man, I clicked the link. The contest is open only to those who take his “Master Class” — a series of videos that costs $90. I am being asked to pay $90 to learn from the man who theoretically mentored Michael Ledwidge. Yikes. But I’m sure a lot of people will fork over their precious cash (even more precious to working writers) to chase the dream of seeing their names on the cover of a best-seller. Hell, someone is going to win, and that someone will likely produce a better novel than Step on a Crack.

Even if you don’t win, your idea might make the big-time; here’s some fine print: They can “use the content, including without limitation, the right and license to make, use, sell, offer for sale, and import any products and/or services which practice or embody, or are configured for use in practicing, all or any portion of the content…. without permission from or compensation to you or any other person.”

(Thanks, Trent, for digging that up.)

So now people are paying $90 to hand over their ideas to a bankrupt franchise. Now, that’s not as evil as it sounds. I sometimes quip (in reference to novels), “Ideas aren’t worth the paper they’re wiped on.” Novel writing is about execution. But if I saw my main character in a Patterson novel written by some (other) hack, it would tear my guts out.

I will not be participating. But I understand if other folks cannot resist the siren call. Even after that analysis, I feel the pull. It is a magnificent prize. I’d like to give those who participate a couple of tips on how to succeed. You don’t have to thank me, it’s what I do.

1) The hero is everything. He is a man. He is unbelievably awesome, yet single. In my very small sample, I have seen a cop, a father of many, watch his beloved wife succumb to cancer in the first book of a series, leaving him in need of a Good Woman, and I’ve seen a war hero who was resuscitated from death on a battlefield only to stand up and fail to rescue his buddies in a burning helicopter. I’m amazed there were no kittens on the helicopter to make the events more tragic.

So, your hero. Tough. Smart. Resourceful. Really feeling a hole in his life where a Good Woman should be.

2) That tough, smart part? Well… he doesn’t actually have to be smart; if you just say he is, that’s good enough. Somewhere in chapter two have a buddy give him shit about his physics degree and the patents he holds, and you’re good for a while. In fact…

3) The good guy can actually be pretty stupid. If he has to swallow his brain to make a scene work, no biggie.

4) Now let’s get to the bad guy. Great thrillers are built on the power of the adversary more than on the strength of the hero. On an unrelated note, in Patterson-plus-one novels a bad guy is handy. The bad guy must commit ALL the classic bad-guy mistakes:
a) create an incredibly intricate plan
b) base their incredibly intricate plan on the incompetence of the good guys
c) after that succeeds, make a really stupid mistake
d) [optional] escalate the threat as the hero gets close
e) refuse a pragmatic way to win in favor of a poetic gesture
f) confess to everything when caught

5) I’m sure I left out a couple, but I need to move on. The bad guy must be one of the smartest people on Earth. Only, as above, you only have to say he is a criminal mastermind; he’s not exactly facing Encyclopedia Brown, here, you know what I mean? Encyclopedia Brown would break the story.

5a) Encyclopedia Brown as a down-and-out detective, bloodied by life yet still standing. CALL MY AGENT!

6) The Good Woman. She’s hanging around the periphery, noticed-but-not-that-way by the hero. Maybe in the next book he’ll see what’s right in front of him. Maybe in the book after that. Treat her well, she is the avatar of the woman reading your yarn. Your contract as a writer is with her. She is, despite limited exposure, the most important character in your story. She is competent, understanding, always there to wash the blood off the hero’s face and look after the orphans he adopted for some reason. When he comes home drunk she is there (having just put the orphans to bed) and she pours coffee into him and listens to him and feels for him.

Someday, she knows, someday he will open his eyes.

7) The Bitch. Everything the reader doesn’t like about her co-workers rolled into one. Sexy, manipulative, only out for herself. In one of the Patterson stories I read, the writer couldn’t even be bothered to make her a problem. She was a bitch, then she felt bad about it and disappeared. Christ I think that lump of poo was written over a weekend. But if you want to shine in the Patterson fold, give the bitch some teeth.

To circle back to the title of this episode: the best way to win is to not play. But if you must play, remember that there is a formula for success. And remember also that you can write to a formula and still be good. Hell, many of my favorite stories are formulaic. So don’t let that stop you. But you actually have to write a good story. That’s the lesson Ledwidge never learned, despite the stature of his mentor.

4 thoughts on “How to Win James Patterson’s Writing Contest”