I had Folly out the other night. In general, I’m not a namer of things. Only one car I’ve ever had earned a name (The Heap), and never have I felt the urge to name my computers or other durable goods. My big, fancy camera, however, has a name. Folly. It’s a much bigger, fancier camera than I should be bothering with, and I still have issues with taking my photos through photoshop before I can post them (and usually photoshop resets the time and day info, so they don’t sort out right with the snaps from my little camera). Overall, labor per picture is about ten times the effort for my little fuji/iPhoto/gallery routine. In the online galleries, there are still many more shots taken with my little camera than with the monster. Granted, the results with Folly are better. Sometimes much better. On those occasions I pat myself on the back for having enough faith in my abilities to spring for the damn thing.

Not that it was a difficult decision at the time. I had borrowed my cousin John’s camera for a trip to Yellowstone. I took about 150 pictures and had a lot of fun. Being able to change lenses makes a huge difference over even a respectable zoom feature on a digicam. So I was looking over the results from the day’s excursion while having a few beers with John because that’s what we do, and I was really happy with the results. Really, really, happy. I’m squealing with delight like a schoolgirl, sipping suds, and occasionally sharing my success with John while he’s on his laptop pulgging away. Finally he says, “OK, here’s what I have for you,” and he lists off a camera, three lenses, and a few accessories. I thought of a couple more accessories and told him to make the purchase.

John likes to spend money on cool toys. At the time, his money/toy ratio was a little thin, so I think he had fun working on mine. I knew that I was making a poor decision, and if I waited and thought about it carefully reason would prevail and I’d chicken out. That’s the beauty of the Internet.

So anyway, that’s not what this episode was supposed to be about. I was goofing around with Folly, taking self-portraits. Amateur photographer, amateur model, extreme light conditions. It was a long night. In the process I discovered a camera setting that would have improved my pictures of Amy immeasurably. Next time I’m hanging around with her while she’s in her little nightie I’ll be ready. But that’s another digression. This episode is all about me.

I noticed something when looking back at previous self-portraits. First, the ones taken with Folly were way better (granted, I shot about 400 frames the other night and never got the perfect one), and second, I look different now. A lot of it is hair, of course. Is that the only difference? You be the judge. In fairness (and, um… vanity) I have posted the most flattering pics from each era. 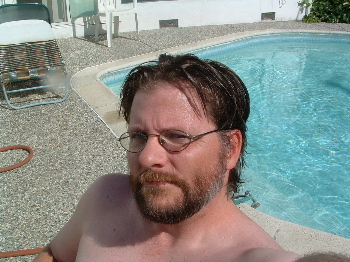 Exhibit A: May 2nd, 2004, San Jose, California. This is the earliest picture of me while on the road trip, exactly one month after it began, and moments before scampering back into the shade. Those lily-white shoulders don’t see the sun if I can help it. 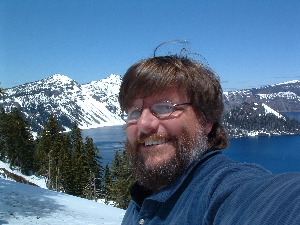 Exhibit B: May 30th, 2004. Crater Lake, about a month later. Beard is getting full, hair is still in the “respectable” range. (Hair covers rather pronounced forehead tan line.) 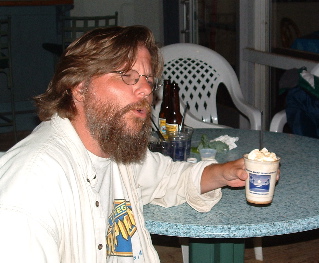 Exhibit C: July 22, 2004. Drinking Buffalo Milk, Two Harbors, Catalina. Things are definitely not moving in the direction of “pretty”. Desert and ocean have done their work on my skin. 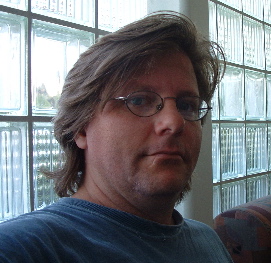 Exhibit D: July 31, 2004. The beard is gone! Still not looking exactly clean-cut, but I was wearing shoes while in the Pacific Beach Library. 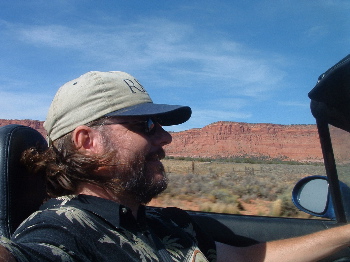 Exhibit E: October 9, 2004. After some attempts to stay clean-shaven, I had given up. Hair is becoming a nuisance when driving at highway speeds with the top down. 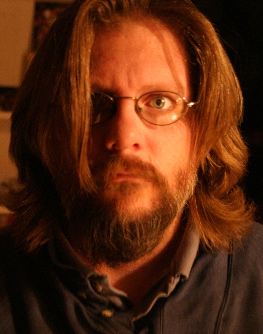 Exhibit F: December 10, 2004. Shaggy, with two-level beard. (I had started to shave it off, but stopped at a goatee, and now it’s been growing in on the sides.) As I mentioned before, this picture is one of the best of the hundreds of shots I took. I got so close so many times, but never nailed it. This wasn’t my first night shooting myself, but it was the first session with Folly. You won’t be seeing any of those previous results. I got a heck of a lot closer this time than I ever had before. This shot would simply not have been possible with my little digicam.

Looking at the first and last pictures tells me I’ve covered more than just miles. Time has passed, obviously, months of not having my own bed, of quiet solitude punctuated with raucous good times with my friends and family. Months of wearing the same clothes, of living with only what fits in a suitcase. Months of restaurants and bars and of not showering as often as I would have liked. Months of worry, fatigue, peace, and inspiration.

Damn, I’ve got a good life.

18 thoughts on “The Deterioriation of Jerry”