It was hot in San Jose last Sunday, that uncomfortable sticky sort of hot that saps the will of strong men. My sweetie, fuego and I were feeling lethargic as we made our plans for the day. Two options presented themselves: go to a movie or go over the hill to Santa Cruz. After some muddling around we chose the latter. We loaded up the fnord and made our way south.

Along with half the city who had the same idea. Traffic was heavy; we came to a full stop on the freeway before we even reached highway 17. Once past the summit things loosened up until we reached the outskirts of Santa Cruz itself. Then is was all stop-and-go, inching our way toward the boardwalk. As we crawled along, however, we noted that it was quite a bit cooler on this side, and there was a fresh breeze to keep things reasonable. Finally, finally we paid the fee and parked in one of the big lots. When we parked we were given a bunch of coupons that pretty much offset the cost of parking.

I felt the stress of the traffic lift from my shoulders as I stood in the parking-lot breeze and wondered if I should have brought more clothing. No matter. It was time to have fun. We sauntered onto the boardwalk and took the lay of the land. The first thing one does at those places is pay, and naturally there were enough options for payment that three indecisive people can spend a long time figuring things out. Finally we elected to go with the unlimited ride wristbands, so we could pay once and stop thinking. The deal included tickets that could be redeemed for arcade tokens. It was without a doubt the right choice.

Wristbands on, we decided it was time to do some rollercoasting. The Santa Cruz Boardwalk (“Voted the best seaside amusement park in the world!”) boasts the venerable Giand Dipper, the sixth-oldest roller coaster in the world (according to them; when I checked on the web it came in 12th). It’s been through a major earthquake that flattened much of downtown Santa Cruz and it’s still going strong.

Despite the fierce traffic to reach the park the lines for the rides were not long. Perhaps we had dithered away so much of the day that many people were wrapping up their visits by the time we got there. In any case it wasn’t long before we were seated in one of the cars.

One of the challenges of roller coaster design is keeping the entire ride interesting. The cars are dragged way up, then go through plunges and gyrations, gradually losing energy. This makes the most intense part of the ride near the beginning. The Giant Dipper does a good job of using the last few feet of drop by using them immediately after you get on the ride, before you go way up. We rolled away from the loading area into a pitch-black tunnel as we twisted and turned. Whoa! I wasn’t expecting that!

Then it was up to the top and over, under, and around. Good fun. Not heart-stopping by modern standards, but a whole lot of fun. We got off the ride and fuego sprang for the photo. Good call, fuego! 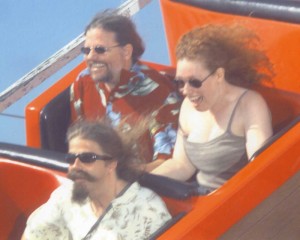 fuego, my sweetie and me on the Giant Dipper

Then it was bumper cars, a really lame haunted house, and some arcade fun. The love of my life, it seems, spent some time as an arcade rat. “I hope we can find Addams Family Pinball,” she said. We did. We played. Also we played a lot of head-to-head skeeball and rode some other rides. And more bumper cars. Then there was the Fright Walk, a different haunted house that was way better.

Meanwhile fuego was in touch with our cousin and her husband, who live nearby, about meeting up for drinks and a snack after we were done. “A couple more hours,” he told them once, then three hours later, “it looks like we’re finishing up.” It turned out we weren’t.

Naturally we had to have some of the “food” available. My sweetie had long ago learned that I had never had a deep-fried twinkie, and she was not going to let the opportunity pass. We watched as the guy impaled a twinkie, dipped it in heavy batter, and dropped it in the fryer. Wow. We split a single calorie bomb three ways, and I sampled with strawberry syrup and the traditional chocolate. It was everything I imagined it would be, and then some.

We had finished up with Family Guy pinball and fuego and I were in an air hockey showdown when the announcement came that the park was closing. We had defeated Santa Cruz boardwalk. Hooray us! Tired and happy we made the long trek back to the car, now alone in the vast parking lot, and drove to the brew pub where we were to meet the others. It was closed, but there was a crepe place called “The Crepe Place” that was still open. We sat and had a great time chatting and catching up, then it was time to drive through deserted streets back over the mountains and home.

It was a very good day.

2 thoughts on “Sunday on the Boardwalk”