Last night as my sweetie and I were sharing a big salad and watching TV, she turned to me and said, “We should do Lite Brite!” I readily agreed. I had never seen an actual Lite Brite in action.

You remember Lite Brite, don’t you? It is a backlit frame into which you can stick translucent plastic pegs. The colored pegs glow merrily. Lite Brite! You can paint with light! the jingle went (approximately).

I had given the Lite Brite a lot of thought back when I was roughly four years old, and occasionally thereafter. I only remember little bits and pieces of the kids’ program Captain Kangaroo, but I remember the Lite Brite ads that supported the good Captain and his loyal sidekick, Mr. Greenjeans. I remember the ads very well, because it was one of the earliest engineering challenges I ever tackled. How the heck did the dang thing WORK? 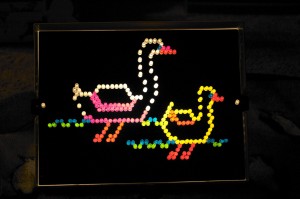 In the ads, the pegs are pushed into a black surface and light up. Sweet! obviously there is something backlit and when a peg is pushed in it glows. At first I tried to come up with a system where pegs could be placed anywhere, and stay in place. And then came the real engineering challenge: making the holes close back up when the peg was removed. This last feature was obvious—otherwise the toy would not be reusable, and the smallest mistake meant you ruined everything.

After more careful observation, I saw that the pegs were always in a grid pattern on the board. So, I realized, there was a grid of holes that the pegs could be punched into. With that knowledge, I imagined a system with little spring-loaded doors for each hole. Push the peg in, the flap opens and light comes through. Pull it out, and the flap closes. I watched the ads closely for any sign of the doors. There was none. The black surface seemed completely uniform. Perplexing. Over the years I mentally fiddled with different designs for the Lite Brite doors that would not be prone to light leaks.

Fast-forward forty years, when I came to live with someone who owns an honest-to-God Lite Brite. At last the Engineering mystery would be resolved.

The answer: black paper. No doors, no flaps, no self-repairing gelatinous layers. You mount opaque paper over the grid and punch holes in it with the pegs. There is no undo. The black papers that come with the LIte Brite have little letters printed on them, for color-by-numbers fun. And really, can you imagine how long the delicate little mechanisms I had been imagining since my very first days of TV watching would have lasted? In my gut I knew that there had to be a simpler answer, but I never let go of my assumption that you could take the pegs back out again.

We sat on the floor, my sweetie and I, taking turns punching in the little pegs (I had trouble differentiating the pink and orange ones before punching them in), and had a good ol’ time. When we were done we kept the Lite Brite plugged in to bask in the glory of our masterpiece. And it was good.