I have, for the past 21 years, participated in an activity known as National Novel Writing Month. The concept is simple: over the thirty days of November, poop out 50,000 words that is in some way justifiable as a story.

Most years, I walk into the adventure with an idea in mind. That idea is almost universally a setting; I have a great place for a story, and all I need is an actual story. The towers of Miami rising up from the sea. A planet habitable only at the poles.

This time, I kicked off with a scene I shared here, and the setting is interesting, but the story jumped out, and the story is vast. And as I wrote, it just kept getting vaster. Structure emerged, as milestones marked by the good guys become dominoes to be knocked down later by the bad guys.

Good guys? The sweetest part of the story was that Tommy, a kid you’d probably like if you met him in a bar, decays. He is at some level aware of the compromises he is making, but he lets them happen anyway. This character arc is inspired by George Alec Effinger’s brilliant and unfinished series. (I’d like to think, at least, that it was unfinished.)

Fifty thousand in, I felt like this was just getting rolling. I had set the second milestone (there must be at least four) and the world is only just beginning to think of Tommy as a spiritual leader, and Tommy himself is still far from understanding that. The story is still in the foothills of the rise, and the fall that follows has to be painful.

And Gamma: What’s its game?

What is in my head is absolutely something I’d love to read. Seems I’m going to have to write it first.

But I have another project to finish first. Can’t just change direction every November for the new sexiness. It’s not a chore to have to go back to Munchies. It’s a goddam privilege.

So there’s this novel I’m working on, called Munchies. It’s about a weed-smoking, mom’s-basement-dwelling, motivationally-deficient young man named Deek who finds himself dealing with immortal humanoid monsters that hunt and eat people. (They are not vampires. Just ask them.)

It’s a comedy, with dismemberment, cannibalism, and hot vamposters of every gender.

One of the key things about this story, a facet that will likely lead a small few to love it while others use it as a shining example of the decline of western civilization is that, every once in a while, I go there. I cross the line. (The line, it seems, is the border between “here” and “there”.) I know I’ve got the scene right when a reader laughs with a hand over her mouth.

So I was tightening up the first act, getting things shipshape for my final assault on the end, when I got an Idea. Yep, a big ol’ capital-I Idea. A you-can’t-even-see-the-line-in-the-rearview-mirror idea. It turns out we’re not done with Bill’s penis yet. Oh, no. It has work to do.

This sequence must be in the story. Simply no choice. The only problem is, it’s a major change to act two. There’s the big everyone-in-the-room scene that puts the good guys on the run. After discussion with my wise and noble friends in the Kansas Bunch, I concluded that the good guys could not return to the scene. I wrote the novel accordingly. Now Advika and Deek will go back to the basement. It’s a pretty big change.

I thought I was on the home stretch with this adventure. I’ve been planning what next I might inflict on the Kansas Bunch when it comes time for summer camp, but now I’m not nearly as close to done with this draft as I thought. But damn, it’s going to be funny when I get it right.

Welp, it’s December, and that means another NaNoWriMo under my belt. It was pretty obvious early on that my goal was simply getting my butt into a chair and writing every day, rather than entertain any hope of creating something worth reading. I thought it might also be a chance to interact with some like-minded folk here in the South Bay, and I did a little of that, but not much.

There might be a writing group coming out of it, however. I got a few people worked up on the local message board before I vanished from sight. I need to follow up on that.

I averaged 2500 words a day while I vomited up my November novel. The paragraph that took me over 50K was one in which Cliff Brooks fell from an improbable height, bounced once, and lay still. Killing Cliff Brooks is a local tradition. Before his body was even cold I had turned my attention back to Munchies, and a 600-word-per-day productivity.

Last few days, I haven’t been executing on that. Tonight I’m dedicating my hours to the written word, and I’m still not making progress. But as soon as I’m done with this episode, I’m on it. Really.

Here’s a picture of the Round Mound of Hound getting ready for our big road trip. 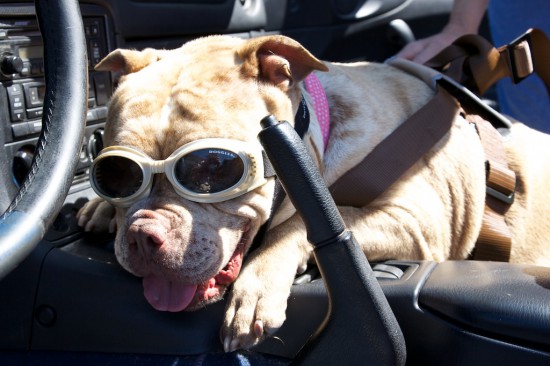 The Round Mound of Hound preparing for some top-down cruising.

It’s kind of a cop-out, I know, just slapping up a picture after all this time. I plan to get back to blogging soon; right now I’m deep into Munchies (the novel you will be hearing more about presently) and it’s taking up all my head space. There’s also the fact that the tale of my last road trip with Chiquita might just come out well enough that I try to flog it in creative nonfiction markets rather than post here. (Creative nonfiction is the new fiction.) But probably I’ll just put it here.

It’s a delicate moment, as Agatha and Deek try to forge a working relationship that doesn’t lead to them killing each other. Deek’s not that good at delicate moments (to put it delicately), and he would much rather discuss bears. Agatha is annoyed, and Deek barely escapes with his life.

I’m trying not to fall into the “I hate you so much I must like you” trap with these two, but its steel jaws are open and waiting for my careless step. It’s a fun formula, dating back to the dawn of courtship, so it’s not inherently evil. It’s just… not this story.

So here’s a fragment of the scene. There are some other bits in the scene I was tempted to share, but this part stands on its own pretty well and isn’t too long. It’s a little bit edited because Agatha’s physiological reactions would be distracting without the context that came before. She’s not human, after all.

Agatha leaned back and studied Deek as he returned to his pancakes. “You seem very blasé about it.”

“About my people hunting and killing you.”

“Oh.” Deek scratched his head. “I dunno. I’m not pissed off at bears.”

“Yeah. Bears eat people, right?” He swirled a slice of his pancake stack in the lake of syrup on his plate.

“Bears are stupid animals. We are far more dangerous than bears.”

“You ever fought a bear?”

“There you go, then.” He gestured to show the argument was closed. “You call yourself some kind of badass bear slayer, but when it comes time—”

“Deek, I could kick a bear’s ass with one hand tied behind my back.”

“You wanna go to the zoo and prove it?”

“I— no! What the hell are we talking about bears for, anyway? Who gives a shit about bears?” Agatha looked up to see the waitress standing over their table, holding a steaming pot of coffee. The woman’s lined face was set in a frown as she glared over her reading glasses at Agatha.

Deek positioned his cup for a refill. “Apparently she doesn’t like bears,” he said, his eyes arched in an apologetic shrug. “I happen to think they’re all right.”

The waitress threw him a ghost of a smile. “Am I in the presence of another bear afficianado?” he asked.

“Bears are all right,” the waitress said. She filled his cup but didn’t seem to notice Agatha’s. She left on squeaky shoes to visit the next table.

“I can’t believe you don’t like bears,” Deek said.

Agatha pressed her palms against the cool formica. “Deek. If you say that word one more time—”

“Yes. Bear. If you say ‘bear’ one more time, I will kill you. Not just the metaphorical kill or the hyperbolic ‘kill’ people generally use at times like this, but I will really, truly kill you. Do you understand?”

Deek raised his hands in surrender. “All right, all right. You’ve got some kind of aggro thing about… animals that shit in the woods. No need to get all bent out of shape.”

I don’t think I’m giving away too much to say that Deek says the forbidden word one more time.

Sometimes you see it coming, a special type of melancholy that means it’s time to find the heart of the story. It’s the time to write the scenes that reveal the souls of the participants, and give them the power to change the world.

Even in a comedy characters strive to relieve sadness, to end loneliness. When you touch the sadness, you find the character, from Ann Boleyn to Zapp Brannigan. And even Deek, the stoner mom’s-basement-dweller dropout from life. What’s he hiding from? It’s time to find out. I’m in that place.

If I’m going to get a draft of Munchies done by the end of October, I’m going to have to get crackin’. I am way, way behind.

Meanwhile, in the kitchen, two new kinds of banana bread out of the oven today, varieties never before imagined. Oh, yeah, life is good.

I’m trying to think of the last time I saw a movie that was advertised as an ‘event’. Maybe never.

My sweetie carries a copy of the constitution in her purse. Awesome.