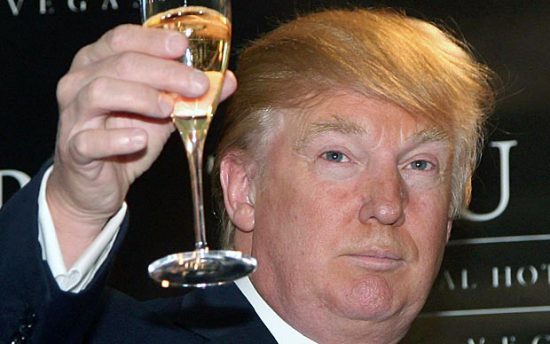 My cousin, over in Facebook-land, has been soliciting ideas for drinking games for the Republican National Convention. It’s going to drive you to drink anyway, why not make a game of it?

The major political conventions have been reduced to noise and flashing lights anyway, since the conclusion is foregone. In smoky rooms where cameras never reach, actual policy decisions might be made, planks laid for the coming campaign and whatnot, but those meetings hardly need the hoopla of the convention. It is, really, just an extended political ad that the major networks offer up for free.

The Establishment will now do pretzel contortions to pretend they liked Trump all along. But they didn’t like him then, and they don’t like him now. A large chunk of the party just wants to punt this one over to Hillary and try to take it back in four years. There will be agonizing moments of discomfort durning the RNC.

So, the drinking. I figure there are a couple of easy categories, and one tricky one.

Things People Say
These don’t have to be an exact match, it’s the spirit that counts.
“Donald Trump is a savvy businessman.”
“Donald Trump cares about America.”
“Make America Great Again!” (if you accept this one, you will get hammered).
“Donald Trump undertands

Images
Weeping male zealot (1 drink)
Weeping female zealot (3 drinks)
Big crowd shot with all the signs pumping to insipid piped-in music
Trump, with his hand raised in a gesture that might not be Hitler but is definitely in Mussolini territory
A black person. (1 drink)
The same black person (2 drinks)
The same black person another time (Ok, there will be four black people there, and the cameras will be hungry for them. Your call whether to go linear or exponential here.)
Beauty shot of Cleveland from the air.

Tongue-Biting
One of the greatest travesties of this election is otherwise-rational people will be backing Trump out of misguided party loyalty. Moments when those people are captured by the cameras will be the most precious of all.
Party leaders golf-clapping.
Top Republicans forcing smiles only made possible by the intake of copious cocaine.
Conventioneers wearing Hillary buttons.
Mentions that if Trump doesn’t win in one round, delegates are free to back other candidates.
“I’m not saying Trump is [racist/sexist/stupid/unethical]…”
Referring to his campaign as unorthodox.

If the list gets too long, the game gets too complicated (and dangerous). It might be too long already. Still in the spirit of the convention, I’d like to open the floor to proposals for other planks in the game platform. Comments left here at the blog will live on long after Facebook comments are lost in noise, so I encourage the conversation to take place here.

1 thought on “The RNC Drinking Game”