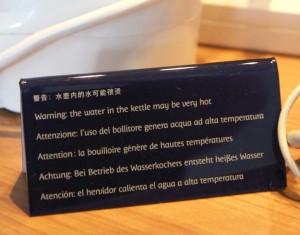 Warning sign in our cabin telling us that the kettle worked

This boat is, apparently, a very dangerous place. Everywhere one turns there are warnings of the mortal peril we face every day. Here is a sample of the dangers we are warned about. Each warning is written in six languages, so it requires dedication to find where on the sign is the warning for you.

Of the above, the warning that is the least silly is actually the one about flushing (except it’s also posted above urinals). The toilets use some sort of vacuum system to flush, and if one were to form a seal between nethers and seat, who knows what might happen? Thus the heads onboard have been built with a design that would require a gifted contortionist to flush whilst seated.

Around the ship there are plenty of other warnings and safety instructions as well, a different sort of warning, given pictorially rather than in six different languages — things like “go this way if the ship is sinking.” Some of those admonitions actually seem reasonable, or even (dare I say?) helpful.

Oddly, there are no signs warning guests to not fall over the rail and into the ocean. I guess it’s OK to do that.

3 thoughts on “Do Not Flush Whilst Seated”