One thing about making a little movie on a very low budget: when you don’t pay the extras you never know what to expect. You really can’t twist elbows too hard, and since most of the people who show up are friends, you also don’t want the experience to be too bad. But there’s just no getting around the fact that being an extra in a movie is mostly about sitting around waiting.

In this case we managed to come up with some small compensation for the extras; we were shooting in a little blues club so we opened a tab for coffee and other beverages, including a keg of beer. We told the extras to be there at 3 in the afternoon, and we had no idea how many to expect. We were hoping for at least twenty, but we’d spread the word far and wide, so it was possible that the siren call of ‘free beer’ would bring in a lot more. Then again, it was also possible that no one would show up at all. No way to tell.

My day started much earlier. I woke up with the sun (pretty early these days) and couldn’t get back to sleep. I decided to use my Saturday morning to get a couple of errands done. There is no getting anything done in Strašnice on a Saturday morning, so I hopped tram 7 and headed for the shopping Mecca known as AndÄ›l. In that neighborhood there is a big electronics store, and I bought a nice little external hard drive that holds a whole bunch of ones and zeroes. This was going to make passing data to editors easier, and also reduce the weight I was going to have to lug back to the US when I moved.

New technology in hand, I considered what to do next. Breakfast sounded good. I decided to mosey down to the area we would be shooting that day and wander around, learning the streets a little better. Eventually I’d find a place to have breakfast and get another dose of caffeine in my bloodstream.

Yep, one week before I was to leave the city I’d lived in for four and a half years, I finally learned my way around the center. Part of the center, at any rate.

It took me a while to find a place for breakfast that appealed to me. Finally I stopped in at Subway for a meatball sandwich. Perfect. Sometimes that stuff really hits the spot. I cracked open my book, enjoyed the sandwich and a coke, and life was pretty good. When I was done it was still early for my scheduled meeting with fuego and the shooting crew, so I found a sunny place and kept reading. After a short time I got a message from fuego: “We should meet early and grab a bite to eat.”

We met at Chillilili’s (rhymes with chile Lily’s), just a few doors down from Blues Sklep, and fuego had a snack while I had tea. For the record, the people at Chilli Lili’s (spelling varies by signage) are really cool. fuego and I talked about this and that and the crew for the exterior shooting gathered. We wanted to get a few more beauty shots of the two walking through Prague, and we finally had found the right doorway to be the entrance to U Nikde. 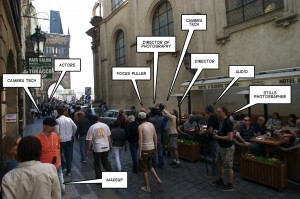 There is a rule about shooting films on the streets of Prague. If you put your camera on the ground (by using a tripod, for instance), you must get a license first. I watched as the crew set up the camera on a tripod. “Um… how much is the fine?” I asked. “I’ll tell you later,” fuego said, but I could tell he was nervous. Finally, for the shot right at Charles Bridge, among throngs of tourists, they decided to go handheld and stay off the sticks. fuego was visibly relieved. The fine, it turns out, is 500,000 KÄ, which even when divided by 20 remains an uncomfortably large number. Tomas and the rest figured they could pretend to be innocent film students if trouble arrived, while any non-czechs disappeared in the crowds. They neglected to mention this plan to me, though.

Exterior shots finally complete (the door worked out nicely), we went back to the bar, where preparations were already well under way. Extras were starting to arrive, and mill about, not needed yet and underfoot in that small place. The crew was assembling a large jib arm with remote head for the first shots, and soon the band arrived and began to set up while the art director (Soup Boy had no idea that would be him when he arrived) tried to dress up the stage area a bit. Zlato was our mule to bring munchies and other supplies from a nearby department store. Everyone was pitching in.

Still, we weren’t shooting yet. People were fiddling with the jib, and I assumed that was the cause of the delay. Perhaps the jib setup was behind schedule, but that wasn’t the real problem. It turns out the lighting guys had locked their keys in the van. They couldn’t get to their stuff. Ever-resourceful Steve tried to help, but eventually it became clear that a locksmith was going to be necessary. Meanwhile, no shooting. The band was getting bored, the extras were getting drunk, and I was getting more and more stressed out.

It took an hour and a half to get the lighting truck open. Yikes.

So then we shot, finally using the extras at about 7 pm, the time we had originally told them they would be able to leave. That was when the owner of the bar started to get pissed off. He was supposed to open at seven. While that wouldn’t have bothered us (more extras!) he didn’t think it was a good idea. I’d feel worse for him, but the extras and crew were buying far more than he would have sold to the first arrivals of the day. Still, his anger added to my stress.

In the end, we got most of what we needed. More extras would have been good, more time at the end to shoot some confusion and pandemonium and whatnot. The story may have to be tweaked a bit as a result; we’ll find out once we get a rough edit.

Rene Trossman and his band were helpful and professional the whole time, playing the same song over and over while we shot from different angles and featured different musicians. I’m pretty sure we got what we needed to make a good scene. We’ll find out soon enough.

After the main shoot the band took a break and we cleared out all the gear so the bar could open for business. Just a little later than scheduled Rene and the boys took the stage for their actual concert. We set up in the back and shot the first set for them, Soup Boy catching other angles handheld. Hopefully it’s footage they can use for their own promotion. I was worried that after all that shooting they wouldn’t have any energy left for the actual show, but I was wrong. They had an excellent gig, and we stayed to listen, eat pizza, and unwind. The owner eventually bought the last stragglers a round of something really nasty that he apparently thought was special. Makes for one of those half-hearted thank-yous.

Finally home, bed, and a gradual sigh as the stress went away. We have a film in the can, as they say.