By the dawn’s early light, I dragged my sorry ass off the sofa and stood in a daze, trying to blink moisture back into my eyes and scratching myself. Maybe I can go tomorrow instead. But the morning had been cloudy the day before, and it was clear today. Make hay while the sun shines. I loaded up on gear and shuffled out to the car.

The Miata’s top was wet with dew, so I started the trip with it up. The motor came to life with a soft purr, which I immediately replaced with the blast of Rock ‘n’ Roll. Just as well the top was up so I didn’t wake the neighborhood. Down Main Street I rolled, even earlier than my previous sortie. There was no traffic. East onto I-90 as far as Livingston, which at 80 mph didn’t take long. Just as I had the last trip, I gassed up in Livingston and went to the McDonald’s next door for a cup of tea. It wasn’t open yet. Rarely have I wanted a cup of tea as badly as I wanted one after I learned that I couldn’t have one. Rather than bumble around the town like a latter-day Arthur Dent I decided to keep moving toward my target. I knew there would be a place in Gardiner. 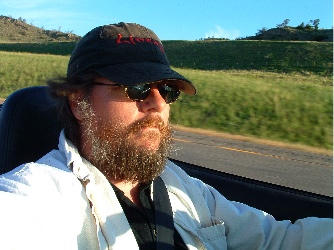 Now with the top down and he heater cranked up full blast I headed south on highway 89. I had the road to myself again, right up until I got to Yankee Jim Canyon, a twisty bit with a speed limit of 70 I was really looking forward to driving. Just as I reached it I came up behind a slow car. A really slow car. I tried to calm myself, but all I could think about was the light. I wanted as much time with that early-morning light up in Yellowstone. Finally an opportunity presented itself and I shot past Pokey like an F14 coming off the deck of an aircraft carrier. I was starting to wake up.

By the time I reached Gardiner I was ready for a real breakfast as well as tea. I wanted a drive-through (The light, the light!), but there was none to be found. I found a little cafe that was open and filled with locals. The appeal of a real breakfast was quickly becoming more important than the half-hour of light I would squander. Eggs, toast, hash browns, and Earl Grey. I learned while waiting for my food that in 1893 Gardiner had 200 people and 21 saloons. My kind of town. 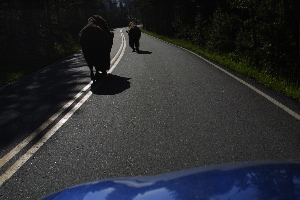 At the gate I turned off the tunes. It was time to become one with my surroundings. I entered the park and climbed through the Golden Gate, up and up into the cold clear sky. Before long I was in a traffic jam of a different sort, following a pair of bison as they plodded up the road, one beast in each lane. I had heard they can be crotchety, and have been known to attack cars when annoyed. As I putted along, I tried to get a picture that showed the slobber dribbling from their mouths and the steam gusting from their nostrils in the cold morning air, but mostly I concentrated on driving and not annoying them. Suddenly I felt quite exposed in a convertible, my face at the same level as the horns on the 200 lb. heads of the animals. Attacks are rare, I knew, but having these two giants close enough I could hear them breathing, I can tell you, those suckers are big. Pulling up next to one to pass it was intimidating. I chose the buffalo butt view for most of the time. On we plodded, and I was wondering just how much space I should have before I slipped between them. Finally a truck came the other way and one of the bison stepped off the road to go around the truck. I dared pausing for one shot as I eased past and was on my way. 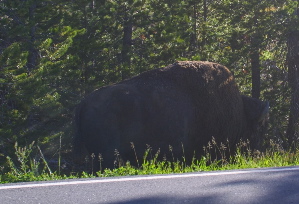 Having already tried a photo tour once, I knew several places I wanted to go. Already I could tell the day was going to be hotter than last time, so I was very glad I got an earlier start. I made my way south to roaring mountain, pausing in several places to take pictures. Roaring mountain was my first extended stop. The conditions, alas, were not quite as ideal as the last time I had stopped there; ironically the sun was still too low to light the steam up as well. I thought of waiting for the sun to be in the right spot, but as the day got warmer I knew the steam would be less dramatic. I’ll have to come back earlier in the year. Bummer. I set to work and got a couple of good steam shots and some nice dead tree shots. I like them, anyway. I also shot this Miata ad (bigger versions of all photos in the photo album): 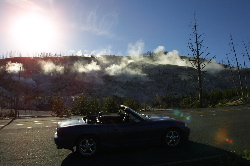 And so the day went. Not far past Roaring Mountain I was crossing a meadow still shrouded in mist, and got some decent snaps as well. 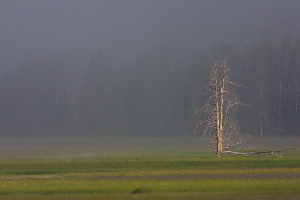 In the few minutes I was there, the mist dissipated almost completely. I hopped in the Miata and continued south. I stopped in the Lower Geyser Basin and took a lots of dead tree pics as well as some shots of the geysers. The geyser basins look at first to be lifeless, blasted plains, the angry Earth spewing steam and toxic, superheated water onto the surface, scouring it clean. The sulfurous steam drifts over the barren land, hot and pungent. Tufts of short grass make a go of it a safe distance from the vents and away from the runoff. 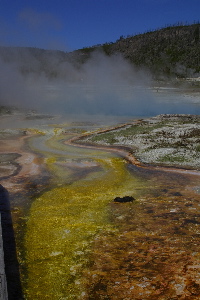 But there is other life as well. Where the hot water flows from the bottomless sapphire pools, bacteria grow. These organisms are so tough that there are companies sampling them to isolate the exotic DNA that allows them to live where there should be no life. For me, however, the attraction is the sinuous bands of color they create. The color of the bacteria is dependent on the temperature of the water where it lives.

Occasionally in these bacteria mats there are the tracks of elk and bison. All I can guess is they enjoy the warm sensation on their toes – there’s nothing to eat or drink near the geysers, but there’s plenty of elk poop.

Finally I reached Old Faithful. As with the other two times I have been there, the geyser had just finished when I arrived. That was OK; now that I knew the drill I took some time to wander around looking at some of the other geysers scattered nearby. And honestly, of all the “must-see” things on the trip, Old Faithful itself was a bit of a letdown. I’m glad I saw it, and there was no question about going back to get some pictures, but in our day and age of thrill rides, a jet of water shooting out of the ground for a few minutes is not that exciting. 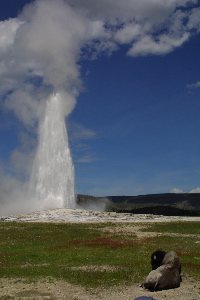 This visit had a special and very unusual bonus, however. A bison had wandered into the circle of benches that surround the big geyser. I got in the perfect position to get a shot of old faithful with the bison in the foreground, but there was a ranger trying her best to keep people back from the animal. She was having a tough time of it. As soon as she got people cleared off the benches near the critter other people would dash in and take them. Dutifully I surrendered my good spot only to have other people move in front of me. Still I managed to get a couple shots. I was also fortunate that the clouds dotting the sky arranged themselves to darken the background while leaving the geyser brightly lit. The hotter weather also meant that the water was less obscured by steam.

After Old Faithful the clouds started to come in, and I was starting to feel very tired. I visited a couple more Geyser basins and pulled under a tree by the moose exhibit and took a little nap. It was a good nap indeed. The sounds of birds, the warm breeze, all good. Finally I headed back home.

There are lots of other pictures in the album – here I emphasized pictures that depicted what I saw more than the artsy-fartsy sort that are my favorites. Go take a look!

And, yes, I am hoping to get Google hits on ‘buffalo butt’.