I skipped breakfast this morning – I didn’t want to take time out to eat and delay my departure any further – plus I was out of food. I took care of a last few things for work, hung around long enough to say goodbye to Mark and Leza and took off. I’m not good at goodbyes; I’d prefer to simply vanish. I would be disappointed, however, if someone simply vanished on me. Disappointed an relieved. I know, however, that most people want the opportunity to say that one last thing. The appropriate thing. Let’s face it. the things you say between hello and goodbye are what matter. I had a great conversation with Leza in the shadow of goodbye. We pulled out our best stories and we both told them well. Ask her about Venice some time.

It was past noon already by the time I left. That was OK, I have a couple of days to burn.

I left the house hungry and thirsty. I had decided to go down through the legendary Carson City (“The Capital of Nevada”, the welcome sign reminds you) although I knew that none of the old west character would be left. As I rode US 55 into town I was assaulted by every fast-food restaurant even invented. I didn’t stop. I couldn’t. Not even the drive-through. The road had me once again, and my blood was singing. I opened a bottle of Coke and put on sunscreen at traffic lights.

The highway took me straight through the heart of Carson City. I was looking at an interesting-looking bar simply called “Jack’s Bar” when I noticed that I was driving past the Nevada State Assembly building on the other side. I bet a lot gets done at Jack’s. I bet they have a back room. Rolling through Carson City is slow, but speed’s not the issue, motion is. I am on the road, and I’m not leaving it. Through Carson then, and picking up speed as I head North to Reno. As the car moves faster I push up the volume on the tunes. (Drill, their self-titled – and perhaps only – album. One of my favorites.) I’m rolling, hunger forgotten.

Reno is just a bunch of buildings next to the highway. There’s a quick shot of adrenaline when the truck in front of me loses a load of wood. They were thin strips, maybe for wood flooring, but in a convertible that kind of thing is extra-exciting. Fortunately with lightning reflexes and catlike grace (and plenty of time to react and room to maneuver) I avoided the crisis and the adrenaline just added to my exhilaration.

Along the way were several tiny towns, most of which had withered up and were about to blow away. The first place that even tempted me to stop was a barn with the classic red roof and Burger Barn written across it in big white letters. It was the kind of place that used to line all America’s highways, before sameness became a virtue and people began to only take 2-lane roads as a luxury. Burger Barn also was closed up and gone. A shame, but so it goes, and so I went. Up on the high plains traffic was sparse, the grass was green, and the world was big.

Somewhere along this stretch of road I started to wonder if I could get someone to pay me to just keep going.

Susanville, the first town of any size, was a very pleasant-looking place. It’s there my route turned alpine again, and it was there I picked up my shadow. It was a primer-gray sedan of indeterminate American pedigree which followed as I turned from 36 onto 44. For the next 50 miles or so it was always there in my rear-view mirror. I was going just fast enough so he didn’t pass. When I passed another car he would pass it too, but he never passed me. I took the corners much faster than he did, but on the straights he was right there again. For a while I was mildly annoyed. I tried to get him to pass and leave me in peace. Later I passed a truck and he couldn’t get around it, and I was alone again, and I missed him after that. I almost slowed down to let him catch up again.

I came to an unexpected intersection as I cruised highway 44. There was a pullout right before the intersection, but I was moving, my shadow buddy was still behind me, and there was to be no stopping. I chose wrong.

“Wrong” is a difficult word to apply when any choice is going to lead to a great drive. Indeed, my wrong choice today was not bad at all. Highway 44 is for most of the length I drove today in excellent condition and passes through spectacular scenery. After the wrong turn the speed limit slowed to a more sane 55 for a road like that, and the pavement was almost silent. With almost no tire noise, and no engine noise as the car slid along effortlessly at that speed, there was only the modest wind noise. I turned off the tunes and glided through the forest.

One section I went through was being actively logged. There were areas that were clear-cut, but not the vast tracts of yesteryear, instead they were strangely straight-edged clearings. From above, it might have looked like a checkerboard pattern. Hopefully after the chewed-up ground recovers they will be strange, square meadows. (Who am I kidding? they’ll be replanted with trees soon enough.) Also there were large areas that had been thinned rather than clear-cut. The ground was pretty chewed up there also, and the trees that were left were pretty scrawny, but today I chose to be optimistic and recognize that those trees now had the space to grow into the great trees whose stumps were still all around. The timber industry is a topic for another day, or perhaps another blog. Today I was burning gasoline, not wood.

Onward and downward. I started to get the feeling I was going the wrong direction, but the road was a twisty one and a pleasant one. Finally I slid down out of the mountains into Reading, at the northern end of the mighty central valley, and about sixty miles farther south than I had intended. No matter; as Interstate highways go, that section is pretty sweet. There is only one reason I say I took a wrong turn, and that is base solely on my map. the road I meant to take dances around the base of Shasta like a drunken bridesmaid. I would have enjoyed that drive. 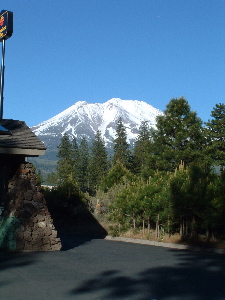 Now I’m in Weed. “Weed”, in these parts, is generally not a reference to an unwelcome plant in your garden. For all I know, the term when used in reference to pot has its origin here. I am in Weed, CA. I met not one single person in this town that would validate my innuendo. It was your typical small town.

My paranoia about finding a room was completely unfounded. Rather than go into Central Weed, I got off at the South Weed exit because there were hotels advertised on those “Gas – Food – Lodging” signs. Now I’ve talked to a couple of people, and Central Weed sounds pretty cool. That’s all my imagination, of course, like that highway I didn’t take. But as your faithful reporter from ‘out here’, wherever that is, I will get to the bottom of Weed. Helpful is the back of the menu at Silva’s, where I had my Lunchdinnerfast, only a tiny portion of which I reproduce here:

Weed on weed:
The city of Weed is nestled on the western slopes of Mount Shasta in Northern California at an elevation of 3,467 feet. Located right at the intersection of Interstate 5 and Highway 97, it marks the beginning of the Alaska Highway… Weed is surrounded by national forests, high desert plains, and volcanic formations of geological interest. The central city in Siskiyou County, it is just fifty miles from hte Oregon border.

There was a lot more. I stole the menu so if you want to hear more, I can hook you up. (There is a council-manager form of government here, and a bowling alley.)

Mount Shasta is 4317m high. I would really love it if someone would calculate how much of the Earth’s atmosphere is between the top of my head and the top of that mountain. It’s probably half or more. Looking up, I couldn’t help but think how thin the layer of life is on our planet. The top of that mountain may have a little life, but not much. Below the crust life does not go so deep either. We, all of us, are a membrane on the surface of a rock. We are a thin film of particularly exciting molecules that are pretty fragile.