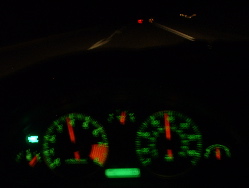 Nearly stopped in Gallup after filling the car up, but the cool night felt so good after the heat of the day with the top up and no air conditioning to speak of. We (the pups and I) walked around the truck stop for a little while, chatting with the security guard. Chicks really do dig the boys. I grabbed a Mountain Dew and mounted up. It was about 1:00 a.m., local time.

Out on the road traffic was getting sparse. I learned the language of the truckers, blinking lights to say “go ahead” and “thanks”. I put it to use when a truch started to pull out to pass then saw me coming. I blinked my lights and he pulled on out. After he was done and I passed him, he blinked me. I felt good, like I had passed a test and become a member of the night time road. Until this 14-hour blast across the desert I have driven almost entirely during the day. I want to see. This time I wanted to travel. Travel I did. We gobbled up more than 800 miles.

The first few hours had been, as I mentioned, hot, hot, hot. The dogs were panting and even Spike seemed uncomfortable. I began rubbing water into the fur on the backs of their necks to help keep them cool. (A thought I had: Since dogs don’t sweat much, do they lose electrolytes? I’m guessing not at the same rate as their best friends. That not withstanding, is there some canine version of Gatorade waiting to be marketed?) Finally we felt relief as the sun set and we climbed up from Needles into the Northern Arizona sky.

Now the night was blessedly cool. Windows up at last, I had been propelled for a distance listening to the Chargers crush the Cardinals. That can’t be good for Arizona, getting beaten so badly by a team as bad as San Diego. After a stop in Flagstaff for dinner I had decided to head back out onto the road and see how far I could get.

Now I was rolling, lightly caffeinated with just a hint of carbonation, watching the miles tick past. I was afraid I would get distracted and look down later to discover that I had missed the magic moment. To keep my head in the game I practiced taking pictures of the mileage gauge in the low light. When the time came, I was ready. I didn’t stop; there was no stopping then, I was a cruise missile on cruise control at 75 mph with my target locked and two canine warheads. I just shot the pic at speed and carried on. I haven’t checked, but I don’t think it came out well. I peered through the shimmering blackness for any landmark for the historic occasion. Antares was throbbing in the breast of Scorpio to my left. The Pleades (“Subaru” in Japanese) were more ahead of me.

The car, as oblivious to the significance of that mile as to all the others, rolled on.