Before I describe to you the recent past, it is only fair that you understand the present. Let’s just pretend for a moment that I was somehow important to national security. Maybe president, or something like that. Let’s say then, that as president I’m sitting in a bar and I notice they have a pretty good selection of single-malt scotch. “The genie has left the bottle,” a secret service man would whisper into his cuff, and the damage control teams would swarm into action.

My drive today, through some of the most spectacular scenery yet, was dominated by a single question. Should I drive to Alaska? I have always wanted to go there, and when was I going to have a better chance? But fundamentally I am tired, and the idea of two weeks or more of nothing but strangers didn’t appeal. Not when there was a place I could go in Montana where I could feel connected. Most important of all, in Bozeman I could relax for a few days, not drive, and spend the hours instead on my other projects. Hang out there, go to Vegas, head out to the space launch, take care of my business in San Diego, then head east. Simple.

I thank the sweet lord for bartenders every day, but this day I offer an extra homily. Her name is Amy, and for today she is my honorary favorite bartender.

Out of Edmonton I went straight west. I followed 16A and then 16 back up off the plains and into the mountains. In Jasper, there was a decision to make. Continue west and by implication north, drive for several days to Fairbanks, or turn south through spectacular country and head back on something more closely resembling my original course – whatever that was.

All I knew was that I was tired. I had spectacle fatigue. I saw things that would have made my heart leap ordinarily, but I could hardly blink. The rain fell off and on while the clouds tore at the impervious peaks, and I simply drove. I didn’t think, then, about how the assault on the stone by the air seemed futile but ultimately the tireless air and water would wear down the stones, as long as the sun shone. I just drove.

I reached Jasper and knew that I was just too plain tired to make the decision about which way to go. I ate lunch there, poring over the atlas, trying to estimate the effort involved to get up there. I had been planning to see the space launch in Mojave later this month. Were the two exclusive? I decided to stop, sleep on it, and perhaps even solicit input from you, my faithful readers. The only problem was that Jasper is a really expensive place to hole up this time of year. I tried several places, but couldn’t stay there. I hit the far end of town and there is was: the choice. South or West. I chose West for the simple reason that sleep was closer in that direction. I was so very, very tired. 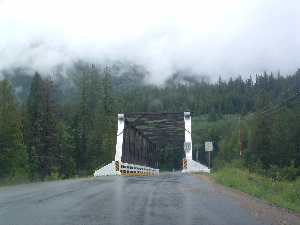 Down, down, down I went, while the mountains shook their fists at the sky all around me. Occasionally I realized that I was driving through some of the most breathtaking scenery on this big earth, but when I did I also understood just how tired I was, Another mountain range. Sun in the distance, rain close by. Rushing river next to me, feeding into Moose Lake. I drove through it with the vague apprehension that perhaps I should be appreciating it all more.

I was heading toward Alaska, but more important I was heading toward rest. When I got to Terre Jaune I had made up my mind. South. Driving to Fairbanks, was, I realized, work. It was a long time without the safe haven of someone to crash on, of no preregularization. It was a commitment. So it was that I turned south at Tete Jaune (the whole yellow head thing is for another episode if I ever figure it out) with a sense of relief. I was back on track. If not now, then when? echoed in my head, but I knew that I wasn’t out here to commit to anything. I had done the right thing.

So I came to Valemount. I found a cheap hotel (actually a very nice cheap one) right next to the town’s only bar. After a nap I headed over. I didn’t take any technology with me, so for quite a while I was sitting at a dead bar with nothing to do but think. I unblocked a problem I’ve been having with The Monster Within and eventually started a conversation with the two bartenders. I mentioned to Amy that I had thought about driving to Fairbanks and she said, “Do it.” I told her about how much I had been driving lately, and how tired I was, and she said, “You should take the ferry up. they call it a cruise, but really it’s a ferry.”

Perfect. Not driving for a few days, going somewhere cool, and on the way become a regular on the boat. As long as I can plug in the laptop, this is ideal.

1 thought on “Crossroads and Epiphany”