A while back a buddy of mine had trouble with his washer. He was pinched for cash, so he tackled the problem himself, rather than call a repair man. He got some information off the Internet before he started, not all crystal-clear, but enough to dive in.

He fixed his washer. But along the way he did something else, as well: He carefully documented each step of the process, with commentary, lessons learned, and pictures. In the process not only did he save himself a hundred bucks or more, he helped a lot of other folks as well. It’s the most-hit page on his blog (last I heard), and for good reason. Here’s the tutorial, in case your washer’s not draining.

Sidebar: It’s a little frustrating for a blogger to create an episode that’s not the main focus of the blog and have that episode take off. In my case it was “New York Sucks”. But at least “How to Fix Your Washer” has some benefit to the world at large. Lately my tutorial about setting up a LAMP stack using MacPorts has become more popular, which makes me feel better.

Let’s take a moment more to understand why my friend’s blog episode was so effective. First, there was the voice: “I’m just Joe Homeowner with a couple of wrenches and a mysterious machine that’s not working right. But I fixed the bastard.” Second, the tutorial answered a specific need. Third, Joe Homeowner was there with you every step of the way, with pictures and the kind of observations that never appear in service manuals.

The most effective reference materials are almost never videos. When I’ve got both hands tied up with the task, I just want to be able to look at the screen and see what I need to know. I want a still image I can absorb at my pace, and look for reference points to reconcile with what’s in front of me. I want to read the instructions three times without having to rewind.

This is the sort of content ‘they’ were thinking about twenty years ago when they were trying to convince us that the Internet was a good thing.

Last weekend I benefitted from a similar tutorial. Owners of 1999 and 2000 Miatas know code P0402: Excessive EGR flow. Usually a P0401 comes first. It’s a design flaw; there’s a narrow passage in the intake manifold that gets clogged. The killer is that the ol’ 402 suggests that a $200 part needs to be replaced. Actually, that’s almost never true in this car. All you have to do is remove the throttle body, take off the top part of the intake manifold, and clean that passage out. 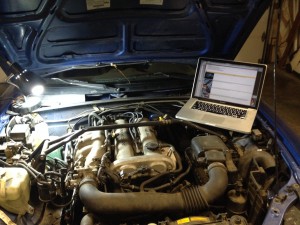 The task is not difficult, but it can be intimidating. What you need is some guy like you who’s done it, who took pictures, who remembers the details, and isn’t afraid to admit he was a little frightened going in. You can feel his satisfaction as you read the how-to and you know you will feel that way too.

The ONE THING I wish he might have mentioned was “when you take the age-hardened hose off the top of the intake manifold, be careful not to break the PCV valve.” But that’s a topic for another episode.

There’s a tutorial out there for almost everything. Almost. Next time you’re facing a task, if you can’t find a good set of instructions on the Internet, do the Web a favor. Make the first tool you pick up a camera. Take a little longer on your repair, record each step, and remember your moments of uncertainty and how you dealt with them. Put it out there and make the world a better place.

1 thought on “On the Subject of Tutorials, and Why the Internet is Awesome”