I’d take a picture, but I’d have to get out of bed. Use your imagination.

Addendum:
OK, now it’s snowing pretty hard, and I’m out of bed. Your imagination is no longer required. 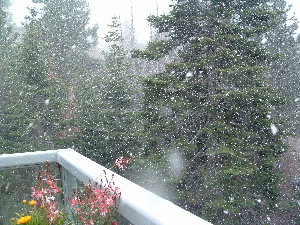 Additional Addendum:
The snow let up pretty quickly yesterday. the sun came out and the light dusting on everything quickly vanished. Still, it was pretty nice. This morning I slept a little later than usual, and when I opened my eyes to say good morning to lake and mountains, what did I see but several inches of snow covering everything. Well, that got me up in a hurry. 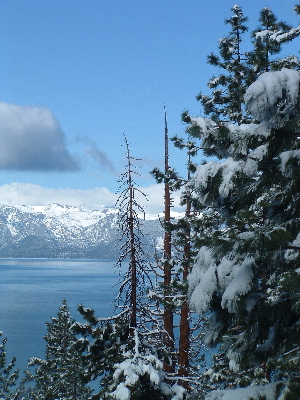 I grew up in the mountains, so I’ve seen snow in May before. Part of me is saying, “Jerry, what the heck’s the big deal?” But it is a big deal. The way the sun is shining off the snow-laden branches, the way the Internet is down so I can’t work, all these things make life special.

I think the best part about it is the surprise. Having lived in San Diego for so long, I pay no attention whatsoever to weather reports. So when I woke up this morning to discover I had been transported to a winter wonderland in my sleep, I felt like a kid on Christmas morning. I’m so stupid giddy over the snow I went out in my bare feet for some of the pictures (photos). The picture I’m featuring here doesn’t have the bright sunshine, but I like the composition.

My Internet connection here is relayed over the lake by a satellite dish (although I suppose it’s not a satellite dish if no satellite is involved), and apparently the connection is quite vulnerable to poor weather conditions. Unfortunately, now that you’re reading this, I’m back connected to the outside world and that means I’m currently struggling to concentrate on work when what I really want to do is go out and play.

Ironically, with the Internet down, I would be able to concentrate on work much better, but the tools I’m using have been specifically designed to not work when they can’t connect to the mother ship, for no reason other than corporate paranoia. Ironically, anyone with actual malicious intent could hack the tools pretty easily, but that’s not how I plan to spend my day.

I’m going on a walk.