I live in a trailer park next to a sprawling cemetery. When the zombie apocalypse goes down, I’ll be relying on my better-armed neighbors on the north side of the park to slow the onslaught while my sweetie and I escape. On a recent stroll through that cemetery recently, I noticed a few things, and it got me to thinking more about what I would want etched in stone above the small patch of real estate reserved in my name that no one was ever allowed to use for any productive purpose.

I passed one monument, dark marble, with text in a script I was unsure of. Fun and curly letters, but I could tell it was a poem. In my imagination, I was looking at a verse from beyond the grave, an insight into the nature of the afterlife.

Soon after I passed an equally magnificent monument etched with the words “We will miss you.” Frankly, this inscription annoyed me. Clearly this message is not intended for the rotting corpse in the ground; this is a resolution by those still above-ground to honor the dead so that when their time comes, perhaps they will be remembered as well. If the spirit interred therein could read the words, it could also discern the truth of them.

I think, perhaps, my most lasting published words will be what’s carved in the stone over the patch of lawn my corpse commands. The title of this episode refers to a painting I once saw in the Louvre, and while scholars and people who know latin may disagree, my simple, naïve interpretation of the scene, where people are reading the words on the stone is, “I used to live here, too,” or in modern lingo, “I had a life, love, passions and fears, just like you. And now here I am.” An entirely appropriate memento mori from dead to the living. (Scholars go on about death existing even in utopia and shit like that. I respect scholars, and maybe the painter was over-thinking things, but my answer is better.)

A brief aside for art criticism: It’s funny, in my recollection of the scene, how small the people were, dwarfed by the world around them. The image in my head is, apparently, a departure from the actual work. Perhaps there was another pastoral scene nearby in the museum that tied itself to the same memory. And researching the thing on wikipedia now, I’m a lot less impressed. Too much nearsightedness and pointing. “Holy shit, Marge! Get a load of this one! Makes you think, don’t it?”

So what will my stone say, should I even rate such a monument? It depends on circumstances, but I think the message must come from me. Don’t carve messages to me in the stone; I won’t be able to read them.

For your reading pleasure I have a few modest candidates here. It’s good to plan your last words in advance.

The first is dependent on the manner of my demise:

Here lies Jerry
Run over by an asshole
rushing the red light.
Was that you?

Simple honesty can be compelling:

Which is a variation of: 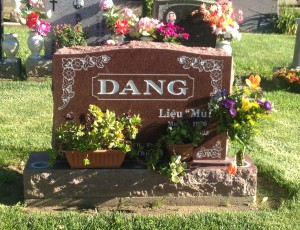 Then again, being dead, maybe you know something your readers don’t. Vague prophecy is popular in some circles, and hey, it keeps you in the game, at least until five years after the big event:

On August 3rd
In the fourth year after the
GRAND UNMAKING
Return here when the bloated
reddened sun touches the
western horizon.
I’ll have a message for you.

Or perhaps the mystical powers of the departed can be put to more mundane use:

Thanks for visiting,
but I’m pretty sure you left your oven on.

In a similar vein, if Arnold Schwarzenegger’s headstone does not say the following, I demand a full inquiry:

Finally, it might be my last chance to advertise:

Hey! Check out my story
in the July 2006 issue of
Fantasy and Science Fiction

It’s a fun game, thinking about what your final, enduring words might be. And although some of these ideas are silly, that’s all right. In fact, it’s better than all right. Dispense with the usual platitudes and seize your chance to shape how you will be thought of long after anyone who knew you is gone. And maybe make some stranger’s day while you’re at it.

5 thoughts on “Et in Arcadia Ego”