If, that is, by “innovative” you mean stupid. John has some misguided added criterion that the resulting instrument should sound good. Now, that’s how to get poor quick.

John, being largely unemployed, has been spending lots of time on his music, and his love for unusual instruments is as strong as ever. He is even considering (in a vague, undirected kind of way) going to brass instrument repair school. I’m hoping he does, so he can get the skills he needs to execute some of our designs (although I doubt the school will cover explosive welding).

The cream of our instrument designs this time was the coaxial trumpet. (John had drawn a picture for me to photograph and insert here, but I used it to catch dog puke. I’ll get him to draw another.) The theory is that the standing waves in the outer and inner bores would reinforce and improve the efficiency of the horn. The catch is that if the tubing doubled back over itself the player would be staring straight into the bell. To overcome this the design gets pretty odd. Another possibility is the triaxial trumpet, so that the tubing doubles back twice, creating a short, fat-looking horn.

“The Lord helps those who help themselves,” they say, which in this case meant “quit waiting for John and draw your own damn pictures.” Here is the result of my attempt: 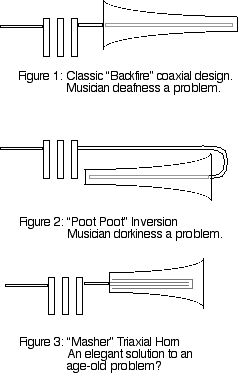 I won’t bore you with all the details, but there are plenty of fiddly bits like the plate that caps off the tube where it doubles back. Brass players love to tinker with their horns, so giving all kinds of shapes, materials, and thicknesses of the various parts would create great aftermarket potential.

If, that is, by “Great Aftermarket Potential” you mean a pile of expensive-to-produce parts that no one wants.

We also discussed techniques for creating trumpet bells composed of various layers of different materials. Explosive welding could be the key there, fusing laminae of alloys that can’t be electroplated. Plus, we could sell with each horn the video of the bell being made. Blammo!