People have been living here a long time. When the Romans came this way they found the island (map) already inhabited, and the locals were stacking rocks. They had already made rock towers and rock shelters and rock walls between fields, and they have been stacking rocks ever since. If you visit this fine island, ignore the guide books. They have no idea at all what it is that makes this place special. Get your ass out of Maó, pronto; it is nothing more than a shameless mortar-using hive of modernity. No, my friend, get out of town, and explore the back roads (lined with stone walls stacked over the centuries), take in the ancient rock stacks, dodge the horrible giant resort hotels and find a secluded beach or dramatic cliff overlooking the sea.

Then it’s time to stack some rocks.

Today limited time and high winds hampered my efforts somewhat, but I did get a couple of nice stacks. Right at the end I had another stack (Menorca 3) going, and it felt like I was pushing the boundaries of world-class rock stacking. Alas, the top two rocks, while improbable, were not aesthetically pleasing, and I blew the stack when greedily adding a very large intermediate rock to set up the edgy top rocks. For Menorca 3 I was near a heavily-traveled hiking trail, and I had a couple dozen passers-by linger as I experimented with different top treatments. Maybe it was the pressure of the onlookers that undid me. I wonder how I appeared to them, scruffy and dusty, as I assessed the local lithage, selected interesting candidates, and hefted them with great concentration — I imagine I looked like some mad rock-stacking hermit (an image that pleases me greatly). But time was limited, and though I finally had in my mind just what I wanted to do, Avis waits for no man, and returning the car late would have been very, very expensive. the rocks tumbled one more time, and away we went.

I did, however, manage to document one complete stack (later enhanced by my two companions), and one partial stack. (approximate location) 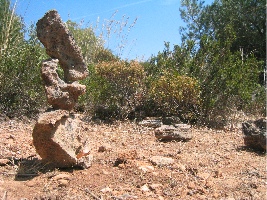 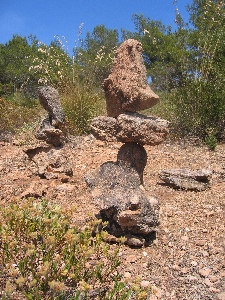 “Menorca 1” (background) and “Menorca 2 (incomplete)”
Menorca 2 (complete) is undocumented, as my camera’s battery finally gave it up and a strong blast of wind hit the delicate structure as I was making a meaningless adjustment, before a backup camera could be brought to bear.

My best work went undocumented this time around, and that’s my fault. I got greedy. Just one more rock. The one complete rock stack standing at the end of the day was relatively simple, but very elegant. I need to study that stack and learn from it. One more rock is not always the right decision.