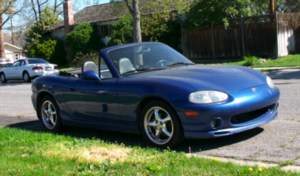 The Miata, almost exactly where I left it at the end of the homeless tour.

On the way over the hill to collect the Miata, John pointed to a place we had eaten at some unknown time ago. “Nobody seems to be able to keep that place open,” he lamented. We discussed why that might be, my theory being that although it is on a busy highway, it’s not near anything. When you’re on you way to somewhere, you don’t want to stop half-way, no matter how picturesque the destination. The place needs to be a destination in its own right to succeed here.

We discussed various gravity-enabled entertainment options – I started with a water slide but then figured that would be difficult in the current water-aware political environment. John suggested other lubricants for the slide (glycerine and KY). We went through some other ideas to make the place successful. When I suggested a bar with an attached hotel that forces patrons to spend the night if they drink too much (at an exorbitant rate), John wondered out loud just why it was we weren’t rich yet. 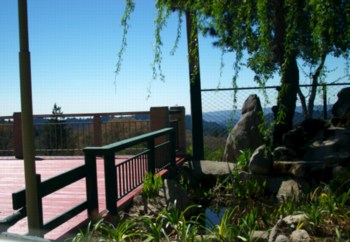 Looks nice out there, but I’m inside.

After one minor navigational snafette (In czech, snafuček) and a bit of an electrical infusion the Miata was purring like a 500-lb kitten, the top was down, and I was ready to drive. The first stop was supposed to be the DMV, but I wanted to run the alternator a little more before shutting things down. I’ll take care of that driver’s license thing later. I drove back south, up the winding road that connects San Jose with Santa Cruz, enjoying the light traffic, revving things a little higher than necessary to turn the alternator a bit faster. At the top I figured there must be enough electricity in the battery for one start, so I pulled out at the restaurant that always fails for a little lunch.

This is a nice place. I am indoors, with a good view of the patio where I would like to be on such a beautiful day, and the wooded hillsides beyond. There are no tables out there, however. Service is friendly and efficient without being oppressive. I am taking advantage of that peculiar North American tradition of free refills on ice tea, and the caffeine is starting to hit my system. My chicken sandwich was tasty. Soon, though, it will be time to go out and see if the car starts. It’s going to be very inconvenient if it doesn’t.