I spent the afternoon writing at Crazy Daisy yesterday, sipping cool Gambrinus and trying to reconcile what I thought I ordered with what they brought me. I’ve never had deep-fried turkey before, but it was pretty good. A woman who acted like she owned the place (could she be Crazy Daisy herself?) parked in the middle of the road outside and unloaded supplies, then left her car sitting there while she sat for an hour and had a couple of cigarettes and talked to the bartenders. She just left her car there, right in the middle of the road.

There are more cars in this town than there are places to put them. Before Marianna left her folks took us out to dinner, and we cruised for some time looking for a place to park, all the while listening to Jiri say that there were too many cars and that there should be a massive automobile tax to discourage any more cars from coming in to the city. An interesting idea to discuss while in a car looking for a relatively less illegal place to park. In many areas you see signs instructing drivers to park on the sidewalks.

In a few more years there will be more parking places, I’m sure, as demand increases even further. If I were king of Prague I would prevent that from happening. Lack of parking is the only thing that stands between Prague and gridlock. (Luckily for all concerned, I am not King of Prague.) 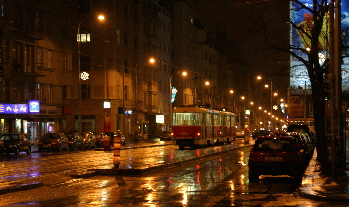 Well, after čty?i piva (four beers) at the bar I dropped by the pivo store and picked up je