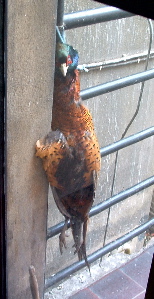 You don’t have to be assaulted by crowds of little people, accused of manslaughter only to be instantly acquitted because the victim deserved it, then snared into a blood feud with the victim’s sister, to know that you you’re a long way from home. Sometimes the signs are more subtle, but they add up.

Take being locked in the building. Any building manager that would change the locks without warning so that his tenants could not get out in a fire would be arrested in the US. Here, people just shrug and go find the guy to get their new keys. Apparently it’s not that uncommon of a circumstance.

I smell ham right now. Mmmmm… ham. I can smell the ham because my window is open. It’s really quite chilly outside, but it’s nice and toasty in here. In fact, it’s downright hot. There is no temperature control in the apartment. In the true collectivist spirit that reigned when this building was slapped together, everyone freezes or bakes together. I guess the man with his hand on the dial down in the boiler room likes his toes to be toasty.

And speaking of buildings, there’s a dead rooster on the little balcony outside one of the landings.

I have to say, everyone I’ve talked to has been very friendly – or at least they sound friendly. For all I understand all the things they say, they could be cursing at me from behind their friendly smiles. When they discover I don’t know what they’re saying, that doesn’t stop them at all. On they go, discussing the weather or, well, whatever. Once NaNoWriMo is over, hopefully I’ll have more brain to devote to learning czech. The guy at Roma Pizzeria has taken it upon himself to teach me one new czech word each time I go in. Last time it was “Dobrou chut” (bon apetit), which I already knew, but I didn’t know how to tell him I already knew.