“How’s the writing going?” People often ask me. “Not bad,” I answer, “but the selling isn’t going so well.” The problem is that I would much rather spend time writing a new story than trying to get someone to pay for a story I’ve already written. What I needed, I decided, was a way to keep track of where each story had been submitted and where next it should go. I had a partial implementation of that in place, but I thought maybe if there was something available at a glance right up there on the wall I’d do a better job keeping up. 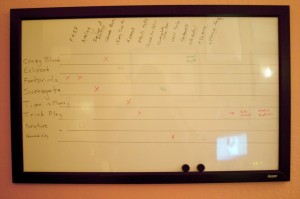 Lo and behold! A precise measure of my slacking.

Meanwhile, I’m working on a story that starts out with several separate threads that converge. Getting the timing right between the different bits has been a challenge, even with software that lets me rearrange bits easily. I thought to do color-coded post-its that I could rearrange, but first I needed to go out and buy the damn sticky notes. My sweetie was also dubious about the glue marks the sticky notes would leave all over the walls. She suggested a bulletin board.

Naturally I did nothing about these ideas, but last week I went to a friend’s house to mix beer and heavy machinery. When I got back the wall over my desk was adorned with two new features, already mounted on the wall and awaiting my pleasure. What a great surprise! The bulletin board is closer to my desk, as is fitting for its more interactive purpose while I write, while I only have to glance up and to my left to see how I’m progressing with submissions for my current short stories. 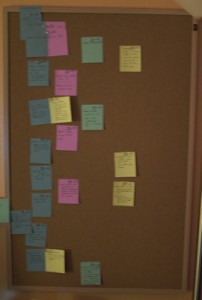 Act One of Dark War. This will get a lot messier.

As far as the whiteboard goes, the stories listed cover everything from humorous flash horror to non-fiction, but most of the stories will fit at several of the markets listed across the top. Red X’s are rejections. Blue boxes are the markets to submit a story to next. Green dates indicate when I should hear back about a submitted story. As you can see, at this time only two of the eight stories are out there being read, with another awaiting a trip to the post office and another waiting for the reading period at the magazine. That’s two and two halves more than a week ago, so I have to say the system is succeeding so far.

On the bulletin board I have act one of Dark War. The threads are color-coded, and scenes that involve two threads are taped together with the significance to each thread spelled out separately. I will be finishing Dark War up as quickly as possible so I can spend the rest of the time before the World Fantasy Convention getting ready to sell The Monster Within. In the next day or two I’ll be compressing Act One up at the top of the board to make room for Act 2. Considering I’ve already written this damn thing twice, there sure is a lot of work to do.

But however much work there is to do, I have someone at my back who knows the best way to spur me on to greatness is to help me get the tools together to do my job well. That means a lot to me.

3 thoughts on “Proof my Sweetie Loves Me”