“I will always love you more than anything,” my sweetie said, “but this is close.”

Just what is it that is threatening to usurp my position at the pinnacle of my sweetie’s affection? Another man? A cute dog? Nope. An exercise machine. It all started a while back when we decided that we needed to get more aerobic exercise on days we didn’t get over to the exercise room at my sweetie’s folks’ place.

(“We” in this episode is a slippery concept; while on paper there were two of us involved in the decision, one of us (won’t say which) did pretty much all the thinking and deciding, while the other’s role was agreeing. We all know how onerous that can be.)

My sweetie went online and found what appeared to be an excellent deal on a compact elliptical trainer. It arrived in its great big box and we assembled the thing eagerly. “Wow!” we thought, “for that price, this thing is excellent!”

In fact, we were absolutely right. We started using the machine regularly, and more-or-less wore it out. There was a design flaw where one of the bolts on the pedals should have been left-handed, and the pedal would come loose. Things got bent, and eventually more parts started failing. It just wasn’t sturdy enough for the amount of use it got in our home. We decided it was time to upgrade, and off to the stores we went.

We wound up at Sears, who carries a selection of NordicTrack equipment. We were looking over what the store had to offer, and it turned out that the local repair guy was there at the same time, tuning up the floor models. He was a friendly guy, and he told us about the machines from a repair man’s perspective, with no vested interest in what we bought. (In fact, now that I think of it, he would probably benefit more if we bought a less reliable machine.) He also showed us that some of the machines folded up. We looked at one of the machines he liked in the folded configuration and I said (quite wrongly), “That’s about the same size as the one we have now.” 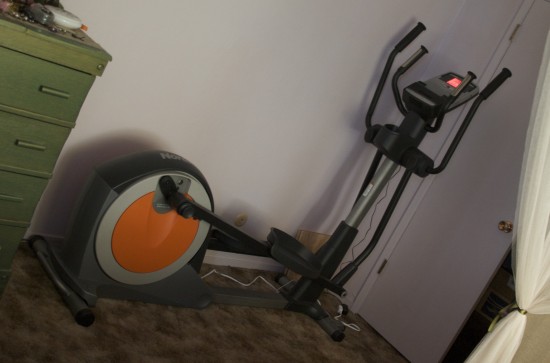 It’s pretty large. The first problem was that the box didn’t fit in our car. Not even close. So the friendly Sears guys unpacked the whole thing and loaded the machine piece-by-piece into the car. (“Friendly” in the above is not just a throw-away adjective, they were really nice.) Even so, it was a trick getting one large component into the back of the car. Of course, once home, we had to lug all those parts up the narrow stairs and into our apartment. Getting a good workout already!

I assembled it with only a small amount of cursing (the electronic console is still a little loose), and we beheld our new machine. “It looks a lot bigger than it did in the store,” I said. We rearranged some furniture in the bedroom and wheeled the beast in. It fit just right in its corner. Now came the big test. 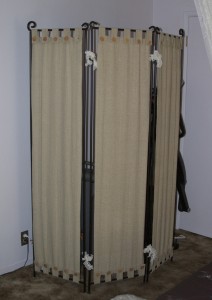 Our Trainer, Tucked Away

This thing is AWESOME! Smooth and solid and quiet. It doesn’t make my knees sore. It does make me sweat and my heart beat faster. My sweetie will spend an hour on it, some days, and always more than 30 minutes. Me, I’m in for twenty minutes just about every day, cruising along and catching up on my “Wait, Wait, Don’t Tell Me” podcasts (I’m up to January of this year). Just exercising and chuckling at the funny radio guys. It’s a nice way to take a break.

Yep, burning calories at an accelerated rate now qualifies as “taking a break”. That’s pretty sweet. We have both been using the machine regularly for a few months now.

One word of advice to those who might consider the NordicTrack E5Vi Elliptical trainer: go ahead and spring for the AC adapter unless you’re absolutely certain you won’t be using the built-in fan (but you will anyway). My one quibble with this device: You have to remove the battery compartment door to plug in the AC adapter. Now there’s a tiny screw and a plastic door to keep track of in a drawer somewhere.

3 thoughts on “Sweating in Style”