After an extended grind at work, it was time to take a few days to get my regular life back on track. I had several goals, from getting back on the bike to installing a ceiling fan to making appointments with doctors.

I was successful-ish. I got enough done to feel like I was catching up, but I didn’t accomplish all I wanted to. I didn’t ride my bike as often as I had planned, but I got plenty of exercise. I didn’t get the new ceiling fan installed, but I learned about alternative home wiring.

I moved a lot of rock. On Wednesday I shoveled up old rock and moved it to its new home in the raised gardens where is color would not be wasted. I was pretty blasted on Thursday, but the real cost of exercise comes two days later, and in Friday I was hurtin’.

The night before I couldn’t sleep. A shit-ton (shit ≡ 6.5) of rock was going to be dropped in the street. There would be no stopping until all 13,000 pounds were not in the street anymore.

I woke up feeling all right, and when the Most Wise Official Sweetie called to have the rock dropped in the driveway rather than the street, my anxiety dropped. And I felt pretty good, physically.

“Today is going to suck,” Official Sweetie said. I was inclined to agree. But if you accept that going in, you can steel yourself to the pain.

The rock arrived, deposited with great care in the driveway. Five cubic yards, 6.5 tons, 13,000 pounds. A shit-ton. “That’s a lot of rock!” The dump-truck driver said, many times. 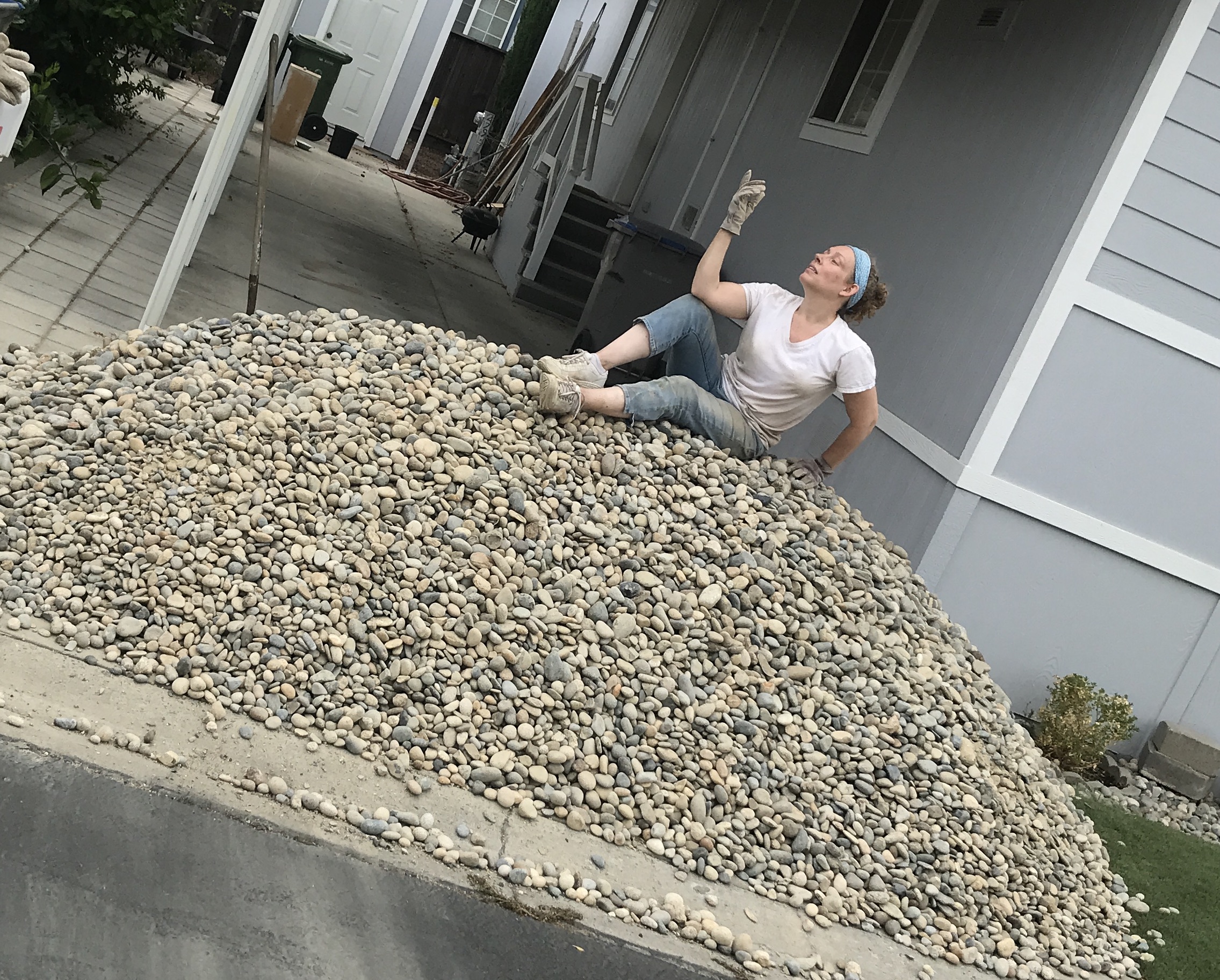 I didn’t reply, “We’re going to rock this town!” though I probably should have. I believe that was the only pun or cultural reference relating to rock that was not spoken over the next two days.

I just wanted to be a machine. Even as the great pile of rock loomed over me, I wanted nothing more than to be a tireless agent of transport. Shovel shovel shovel, trundle trundle trundle, dump. But we weren’t there yet. There was planning to do. Brian stuff.

Official Sweetie did the brain stuff. She also pushed more than a couple of barrow-loads of rock. She is tireless. She is awesome. But it was up to me to move old rock and to place the new stepping-stones.

Once I had discussed whimsey-level for the paving stone placement, and I put some math to use to establish spacing, I spent a while carrying paving stones and digging them in to their new happy places.

Eventually it was time to move rock.

Shoveling is a skill. “Lift with your legs, not your back,” is the axiom, but for the longest time my knee heartily disagreed with that aphorism. For the first few hours of shoveling I put an enormous load on my arms to compensate for all the other body parts not ready to step up. My arm was on fire and I knew there would be hell to pay. Finally I found an odd straight-backed crouching form that did not extend my knee through its vulnerable range, and shoveling improved greatly.

Eight shovels a load, around the house and up a curb. Ten-shovel loads were tough to pull up the curb so I decided to walk more, and just roll with it. It was a big job and it was going to take some time.

As night fell I was beat. Junked. But not finished. My body was hammered enough that I knew I couldn’t assume I’d be motile the next day. I really wanted to finish. My tireless, motivated bride wanted that even more than I did.

But it was not to be. My feet hurt so bad I had difficulty walking. As the night grew darker cars were giving me less room as I pushed loads of rock around on the street. “Five more loads after this one,” I told myself. I had to call it quits for the night.

I managed the five loads, another few hundred pounds of rock moved from A to B. Completely depleted I staggered home with Official Sweetie and when we got there I greeted the dogs and just lay on the floor.

My watch was happy, congratulating me on my biggest workout ever. My dogs were happy to have a chance to bury themselves in such a magnificently redolent pack leader. I was less happy; I knew that as empty as I felt at that moment, there was still a lot of rock to move.

Sunday came round, as Sundays always insist on doing, and I was mildly amazed to discover that I could move. I could even walk. I was expecting agony and I got… okness.

My feet — I don’t know if I’ve properly communicated how they felt Saturday night. I was filthy down to my pores, but I put off taking a shower as long as I could because that required standing. I was amazed that I could put on shoes, let alone walk.

Then it was over. I gathered up our tools and staggered once last time along the path I had blazed along the street. 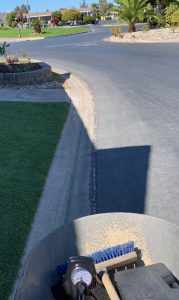 The rock is spread, and it looks good. My legs were noodles, but no worries about getting exercise during my time off.