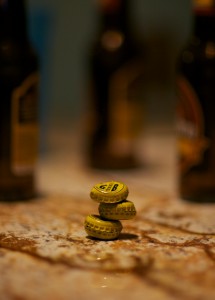 It is five minutes until five, Central European time. The sky is still dark, and the streets are quiet. I’ve been walking for the last hour or so, making my way home from a bar called Tulip. I’m not sure how much of the story I will tell, not because of any salacious or embarrassing details, but because it’s the same story all over again.

… and that’s as far as I got writing the episode before I called it a night last night.

Anyway, Little John invited me to join him at his favorite haunt last night, and I accepted because it had been a while since I left the domicile. A friend of his was singing and playing at Tulip, and they serve a particularly good flavor of beer, so it was a promising evening. I arrived to find Little John there with some of his friends, and we were joined as well by fuego and MaK. By the time Mad Dog (he will not be a regular character here, and how he earned his nickname is Little John’s story and not mine, but by Mad Dog he shall always be known here) joined us, I had already built one minor stack. In marked contrast to the last time I was stacking objects in a bar, this time those at the table were fully supportive. When I started wedging coasters into notches in the salt and pepper caddy, the others at the table began to collect items for me to use. I got a couple of interesting stacks, but nothing spectacular. fuego has pics of my early-evening efforts, so maybe I’ll be able to put one up here.

The music was good, the beer was good, and all was well with the world. Singing along was not just tolerated but encouraged (at least by Little John), and I did some of that as well. Later on a rather astonishingly beautiful woman joined us from the next table over, and cuddled up with one of Little John’s friends. It turns out she’s American, and has moved here to teach at an international school. She’s been here a week. She was very happy with her sparkly shoes, and she wants to be a writer. We talked for quite a while. Somewhere along the way a different musician took over, and his mellower style fit with the advancing hour.

And that, really, is it. Rather sad to think that is the most interesting thing that’s happened to me in the last few days, but any evening that includes stacking things with no resulting disasters and talking to a pretty girl is right up there on the “pleasant evening” scale.