There is a certain class of Space Opera that has what I call “Buck Rodgers Cosmology.” In these stories it is never quite certain what a planet is. You see sentences like “It was still morning on [planet].” Or perhaps “It’s summer on [planet], so dress accordingly.”

And of course we’re all familiar with the “jungle planet”, the “tropical paradise planet”, and the “snow planet”, all of which are entire planets with only one climate zone, and that climate is easily recognized as one of the many on our own rock. So even though we live and interact with a shining counterexample our entire lives, we all too often are presented with a planet that apparently has no poles. Or perhaps it’s in a multi-star system that somehow warms all parts of the globe evenly.

I call it Buck Rodgers Cosmology because early Buck Rodgers adventures joyfully embraced a vague idea of planets that didn’t even seem to be related to stars.

Recently I read some not-very-good-but-for-some-reason-I-read-it-anyway-so-maybe-it-had-a-certain-charm Space Opera, and while the author seemed to have a certain grasp of stars, planets, and whatnot, it seemed that most of the time the planets managed to avoid any of the consequences of being spherical.

While I was reading this thing, I rolled my eyes and moved on. I wonder if the writer knowingly embraced Buck Rodgers Cosmology. I wonder if he made a conscious decision to make planets so easily characterized in order to make destinations more like those in Earth-bound adventure stories. One planet is Hawaii, another planet is Switzerland, and another is Arizona. In fact, these stories are actually set on Earth, an Earth in disguise, at a time when it takes many days to reach Hawaii, and where the inhabitants of Hawaii have blue skin. They’re not space stories at all.

In the end, I decided Buck Rodgers Cosmology was no less valid than the whole Faster-Than-Light-Without-Relativity conceit. It’s a storytelling device, and if the reader is willing to embrace it, then we can all get along.

The story I mentioned above also had big space battles that led to giant spaceships “listing to port” when they were badly damaged. I am far less forgiving of that phrase. The writer is drawing a parallel with modern sailing ships, but sinking boats list because of gravity. There’s too much water coming in on one side, and gravity tips the boat to that side. No gravity in space. No listing. No “port” even, though that could be defined in some sort of ridiculous three-dimensional fleet coordinate system.

I have read a great deal of space opera where opposing fleets of spaceships are all in the same plane.

The thing is, there’s another phrase for a stricken ship that’s more accurate and just as poignant. Stricken naval ships list, stricken spaceships tumble. It’s that simple. And tumbling makes rescue all the more difficult.

So I’ll give you the Buck Rodgers Cosmology, but I won’t give you stupid fleet mechanics. The former provides a storytelling shorthand, the latter is just wrong.

A banana sticker; this one an obvious ripoff of Andy Warhol

In the cartoon-for-grownups Metalocalypse, one episode involves the dysfunctional band’s agent hiring a counsellor to help the members get along. The members of Dethklok are given banana stickers when they act nicely toward each other. This works for a while, as the band covets the special prize, but in the end they discover they can buy banana stickers by the gross. The lead singer, Nathan Explosion, says, “We have found out that you can just, you know, buy psychological validation, so…” The band turns back into a bunch of backbiting jerks.

The Internet is filled with banana stickers. Little bits of feel-good validation that ultimately have no value. One site gave me a sticker for filling out my profile. MapMyRide gives me little trophies for my fourth best ride (out of four). My phone gives me banana stickers. LoseIt.com had me going for a while; some of the stickers they throw around are utterly meaningless, but others are not trivial to earn. So banana stickers don’t all have the same value. Someday I’ll get a sticker on Strava.

For the Web sites that offer these stickers, the reward is more tangible: return visitors. Getting banana stickers make you come back for more banana stickers.

The other day my allergies were kicking in and I pulled out the Flonase. I went to their site to review the instructions, and when I was done, a little window popped up that said something like:

“Achievement unlocked! You have read the Flonase instructions!”

There’s one for the resume.

This is a test shot I took this afternoon while setting up for a very fun (some might even say silly) holiday-themed shoot.

My co-conspirator and I have some post-production and copy writing to bang out before we can share the product of our labor, but I think you will enjoy the result. 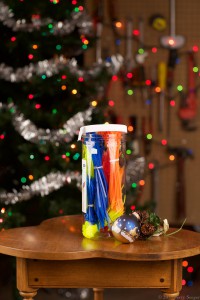 (As always, you can click to biggerize the photo.)

“I don’t know what you’re talking about,” she prevaricated.
“Yes you do,” he blaxtophosed.

As I was writing that last episode, I got an idea. Ideas come in a wide range of flavors, and many of them are undercooked. I’m counting on you guys to make this idea fully-baked. I think there are enough regulars now to make something like this work. Group fiction. Silly group fiction, anchored on a bit of patently bad advice every writer hears at one point or another.

I propose two chapters of a novel, chapters five and ten. The writing should be reasonable but for one rule: no word for verbal utterance can be used more than once. By chapter five our otherwise-talented author, Edgar Pildrot, will be scraping the bottom of the barrel. By chapter ten he’ll be reduced to wild invention to paraphrase ‘said’. Wild invention, I think, is something this crowd could do well. Perhaps also we should include a rule that no character can be described the same way twice. Forget names, they would have been used up in chapter one. Just a thought.

I imagine this would be a perfect application of some sort of wiki thing. I’ll try to figure out how to host one of them (I welcome any guidance), but there’s also the question of the story. What do you guys think? Would you play? How much structure should be there at the start? An outline of the novel with a little more detail for the relevant chapters, or is that too much? There must be some structure; I wouldn’t want a bunch of fun sentences that didn’t follow. Or is continuity part of the challenge? I wouldn’t want to stifle you guys too much. Where’s the balance? I’m figuring the group would write chapter five first, then chapter 10. Kind of a vegetables-before-desert thing, only in this case the veggies are tasty, too.

We also need a good name for the project. My first instinct was Outrageous Dialog Project, but that misses the import of the dialog markers.

Do you want to join us and write silly dialog?
Do you have any idea how to make the project work?
How much of the story should be predefined?
What should the project be called?
Something else?

Please give your two cents in the comments below. I will interpret the sound of crickets chirping as an indication that the rest of you have actual “lives” and stuff, and don’t have time for such silliness. I’m not really sure how many participants it would take to hit that critical mass of fun.