It was on another road trip to Kansas that I first dubbed my blue aloha shirt my Official Travel Shirt. I was wearing it for the second straight day (no sense sweating up another shirt), and I tore the breast pocket just a bit while stuffing in change from a drive-through, limiting the other occasions I could wear it.

But for driving across the United States in a convertible, it was pretty close to ideal. Light and breathable, the cotton fabric was quick to wick the sweat away from my back and provide cooling. When I put my elbow up on the door frame, the shirt would balloon up, creating a cyclone of joy across my torso. Good times.

Good times that finally came to an end on this trip. The ravages of sun, sweat, suds, and more sun began to undermine the integrity of the fabric. The dye faded and the fabric got thinner where the sun hit it most directly—on the shoulders and (rather embarrassingly) on the gut.

When packing for my latest road trip, I realized the shirt’s days were numbered. The pocket was really starting to flap in the breeze and the fabric was giving out along the shoulder seams. This was to be the shirt’s last ride. In retrospect, I should have given the shirt a dignified retirement before the trip even started; it just wasn’t fair to ask it to get me across the Nevada desert in its condition.

The first night, in Wells, Nevada, I took off the shirt to discover two bright-red patches on my shoulders: 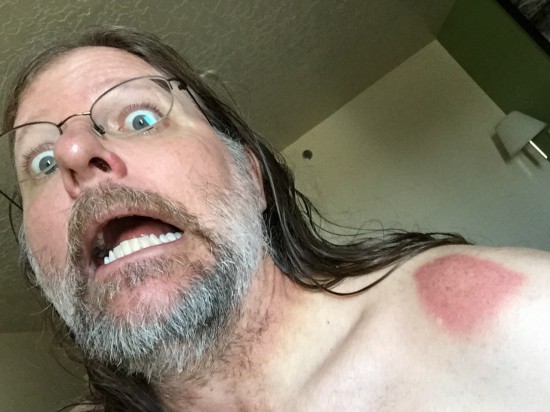 Sunburn on my shoulders makes me cry

By the next night in Vernal, Utah, blisters had formed, and while I waited for my car to be repaired I also tried not to ooze into my sheets too much while I slept at night. 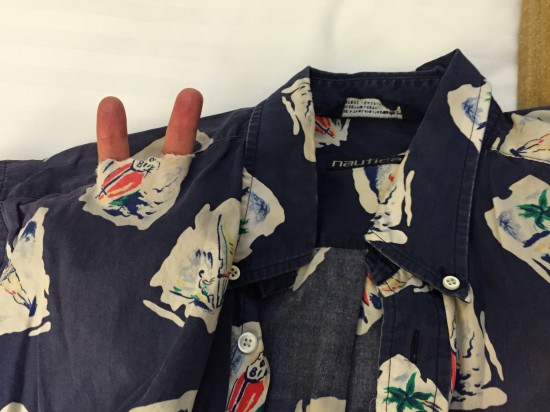 My travel shirt, after one too many days on the road.

The shirt had given its last, and while I had other shirts along for the ride that were adequate, they were all too new and too nice to dedicate to being the new Travel Shirt (though one had good Cyclone of Joy™ action—I might have considered it were it not so dark-colored).

So the search begins, but clothing like this isn’t just found on a shelf, it’s discovered through adversity. It is the product of miles, and the grace with which it handles them. It is sun, and sunscreen, and sweat and wind and time and groping in the pocket for the toll ticket. It is the stop at a rest area with a gentle pit bull going to her new home. It is the discovery of a new road, the onset of a sudden rainstorm, the knowing glance from another convertible driver, the pause on a deserted road at night to hear the chirping of the crickets.

It is the stories. The new shirt will have a lot of catching up to do.